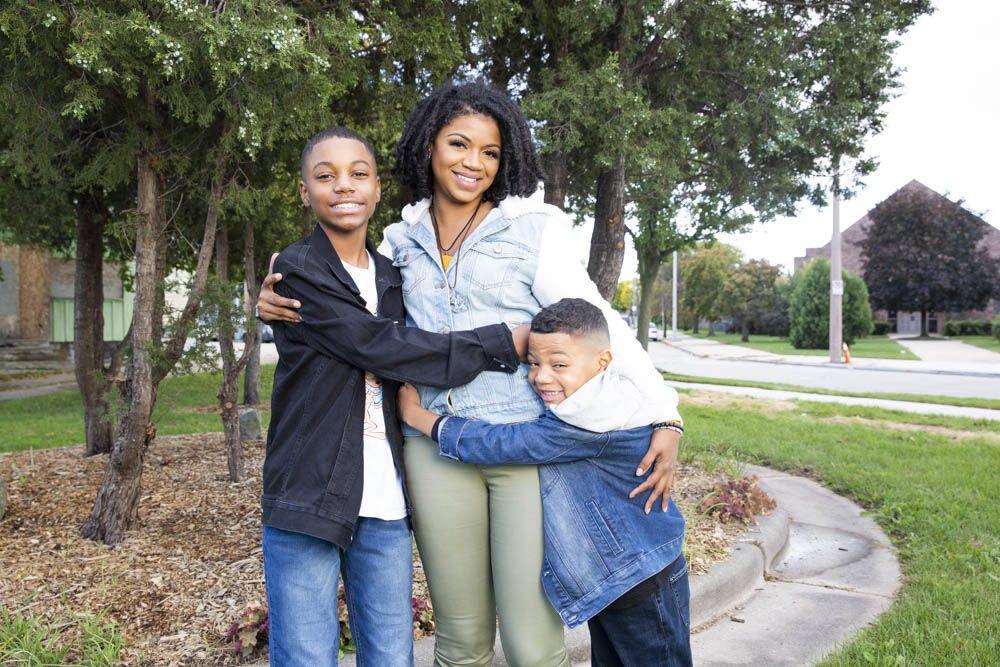 Alahna Parker and her sons Cameron and Donovan. 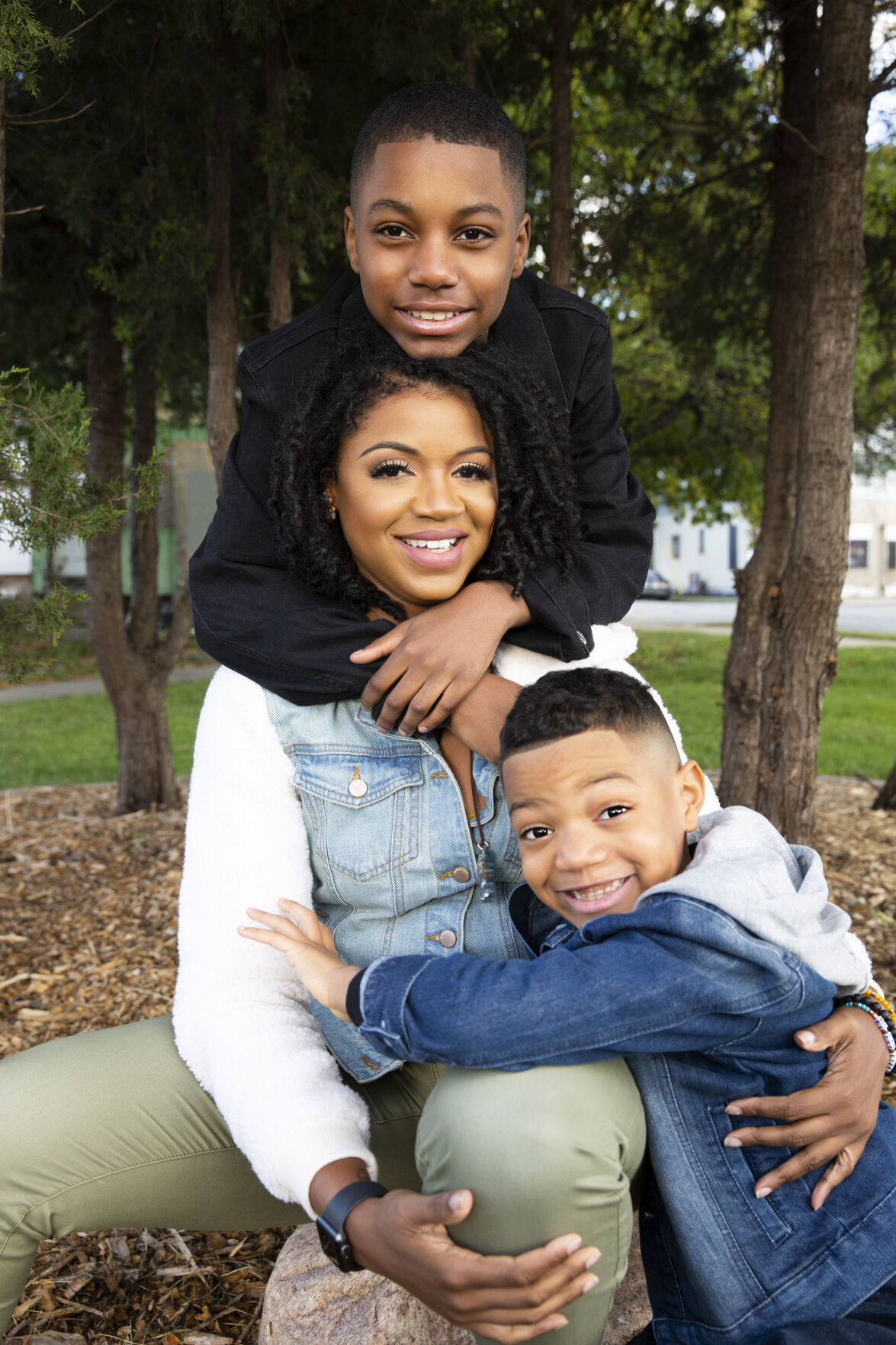 Alahna Parker and her sons Cameron and Donovan. After serving in the U.S. Navy for six years, Alahna now devotes her time to helping others in need. 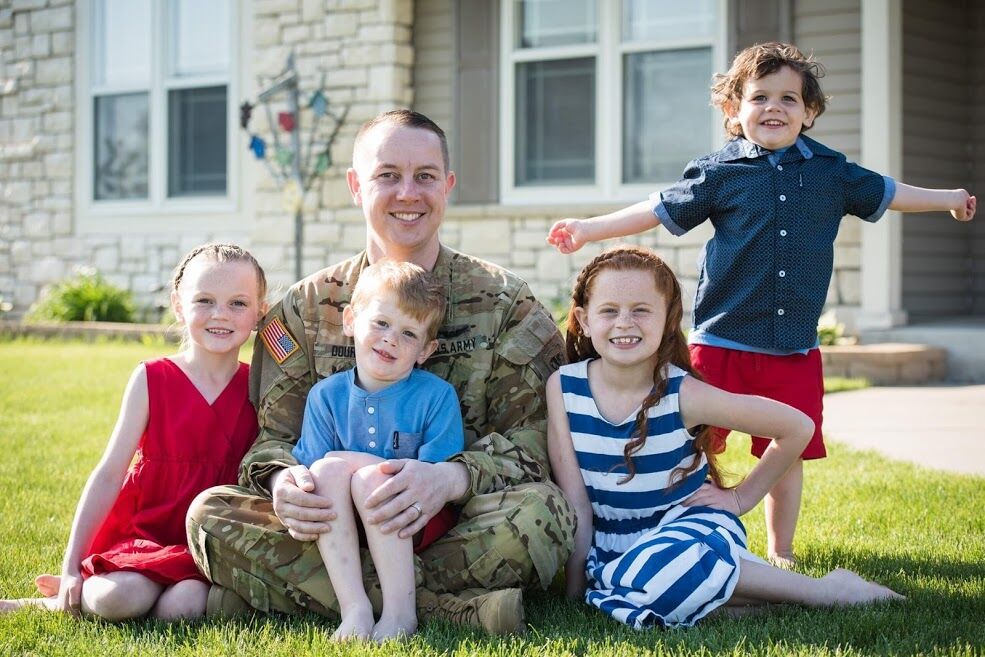 The Dourn children with their father.

When the U.S. went to war with Iraq and Afghanistan, military personnel and their families stayed squarely in the spotlight.

Nearly 20 years later, the country is now focused on COVID-19, unemployment rates, politics, protests and the myriad other upheavals and uncertainties 2020 continues to throw our way. Meanwhile, military families — whether their loved one is on active duty or is a veteran — are quietly serving the country as they always have.

When Rebecca Dourn talks to her four children about their dad’s overseas deployment, she tells them he’s defending our country, selflessly helping Americans to live in peace. “He’s our hero,” Dourn says.

There are times, though, when she has to explain to her kids, aged 10 and under, why their father (a Blackhawk pilot) can’t be at soccer games and other events where everyone else’s dad shows up.

Dourn says that, while the National Guard still has a high profile because of its involvement in COVID-19 testing and crowd control in times of civil unrest, deployed military and their dedication to duty have now taken a back seat in the national consciousness. And that can exacerbate her nagging sense of isolation.

“The most challenging thing for me is that a piece of my heart always feels lonely,” Dourn says. “You look forward each day to the moment where you have a ritual or tradition or dinner where you’re all together. And it’s just missing.”

The Dourn family is able to connect often via the internet, but, because of his location, her spouse’s connection is often spotty. Mr. Dourn, who is on his second deployment, wants to stay actively involved in their children’s day-to-day lives, so that frequent contact (plus items like a USO-provided tape of her husband reading bedtime stories for the kids) are both necessary and cherished.

During her husband’s first overseas deployment, Dourn had just had given birth preterm to the couple’s third child, who then spent time in neonatal intensive care. At that time, Dourn recalls, “everything was new and different, in both the military side and home life.” The Army’s Family Readiness Group was available to her, but couldn’t supply the strong support that she truly needed.

“That’s when I knew that I wanted to be the family advisor for our National Guard units,” Dourn says.

In that position, Dourn provides families with information, resources and communications during their soldiers’ deployments. Friendships with other families are “really the glue that holds military life together,” she explains, because they best share the emotional roller coaster of deployment.

“You go into that beginning phase of extreme sadness, then get into the routine of everyday living,” Dourn says. Later, the countdown to the soldier’s return brings anticipation. “The homecoming is very exciting, but the integration of the soldier back into the home is very challenging,” she says.

Home And Where Her Heart Is

While she was in the service, Parker was often torn between being a good mother to her two sons, now 12 and 7, and being a good sailor. When she returned to her home in Virginia, she learned that one of her sons is on the autism spectrum.

“After my son’s diagnosis, I felt helpless and afraid,” Parker says. “I had no one to help guide me, so I was forced to figure everything out for the sake of my child. After we got him the resources he needed, all I could think to do was to not allow another family to go through that alone.”

The same, she adds, is true when a family needs diapers, food or help with housing. “I just don’t like the idea of suffering and confusion when I know I can be of assistance,” Parker says.

She dedicated herself to helping families dealing with autism in underserved communities, working hard to develop a nonprofit organization to spread the word about the importance of early diagnosis and treatment. “Everyone saw us as successful, but we weren’t doing well,” she says. “I fell into financial hardship.”

About the same time, Parker began to experience depression and a type of post-traumatic stress stemming from incidents during her Navy years. “The depression took over,” she remembers. “I took my sons to my mother’s house and said, ‘I don’t like the way I’m thinking. I’m going to get help.’”

Parker was diagnosed and treated at a VA hospital in Virginia, but felt she wasn’t progressing. Then she spoke with a fellow female veteran who had been treated at Milwaukee’s Clement J. Zablocki Veterans Administration Medical Center.

“She is so happy, and I wanted to feel that good again,” Parker says. She made the decision to move to Milwaukee and seek help at the VA. “I got admitted to the domiciliary, and I’m telling you that was the first thing that was a major turning point in my life,” she says.

As her health improved, Parker was referred to the Center for Veterans Issues (CVI) in Milwaukee for assistance in finding housing. The first stop was an all-female CVI transitional living facility; when she felt ready to reunite with her sons, CVI helped the family find a duplex.

Parker is proud to be the first female veteran to graduate from every program offered at CVI. She is now an enthusiastic volunteer at the Taylor Made Foundation, working on coat and food drives, and helping to supply essential needs during the pandemic. Parker says she and her eldest son love to be among those local boots on the ground.

“It makes you feel like you are actually making a difference,” she says.

The Positive Influence of Peers

As manager of Dryhootch Coffeehouse on Humboldt and Brady streets, Cory McElhatton — an 11-year Army veteran who served three tours of duty in Afghanistan and one tour in Iraq as a Blackhawk helicopter medic — also knows that veterans often make the most effective boots on the ground when it comes to helping fellow vets.

At Dryhootch, which also encompasses a nonprofit organization formed by combat veterans to help other vets navigate their return home, McElhatton uses his own hard-won recovery from addiction to connect with others who are grappling with substance abuse.

“I struggled with my own ways of getting back a life. It wasn’t easy,” he says. “If you’re also trying to find your way, why not reach out and help somebody else to get through what you went through?”

McElhatton says he joined the Army because he needed the military’s rigid routine to keep himself on track. In the military, he explains, “you know what you’re doing almost every day.”  When the soldier returns home, though, “a lot of service members do get lost without that repetitive structure,” he says.

Family routines are also disrupted. Children need to adjust to having two parents in the household instead of just one. A spouse who has been making independent decisions about family life may not appreciate the veteran who expects to resume all of those responsibilities. Then, says McElhatton, the soldier has to “reintegrate into their life as much as (family members) have to reintegrate into your life.”

McElhatton notes that veterans and their families can also face challenges in renting an apartment or securing a home loan, particularly for those who have yet to work the often-required 180 days or more at the same job.

“It’s not hard to get a VA loan, but your interest rate is actually affected depending on how long you’ve had the job,” he explains. And finding a job at all during the pandemic can be a hurdle, he says, because many employers are facing reduced revenues and furloughing workers.

McElhatton says there are simple ways to help families of active-duty military and veterans, “even though you might not be close friends. It’s OK to reach out and offer some help.” For a military spouse who is trying to manage the house, the children and the bills by themselves, a few hours of childcare or a chat over a cup of coffee can be a lifesaver.

“Most military personnel and vets have a heightened stress level and may be more sensitive, even if they don’t come across that way,” McElhatton says. “Kindness and awareness go a long way.”

Dourn suggests volunteering with organizations like the USO or Red Cross to help build connections to military families and veterans. Creating and sending care packages and letters to deployed units is another way to spread care and engagement, she says.

In short, says Parker, don’t look the other way.

“If one of us asks you for help, don’t think about it, just do it,” she says. “It’s the right thing to do. You never know what your fellow American is facing.” MKE

How to Find Help

Whether they have questions or issues with housing, finances, health, addiction recovery or just need to talk with somebody who “gets it,” families of active duty military and veterans have resources to help them over the rough spots. These are just a few of them:

About 67 percent of CVI staff members are veterans, and about 42 percent are veterans with a disability. Here you can find help with immediate needs such as housing and assistance in securing treatment for PTSD, alcoholism and other substance abuse and mental health issues. Help with money for storage fees, security deposits, car repairs and child care for a limited period of time is also available, along with assistance in emergency situations such as evictions (in cooperation with Wisconsin Legal Action). CVI can also assist veterans with job training services.

Dryhootch helps veterans and their families with issues related to returning home, PTSD, and other concerns. Peer support specialists provide help with recovery from alcoholism and substance addiction for both veterans and civilians through Milwaukee County’s Community Comprehensive Services.

Veteran Resources for Buying a Home