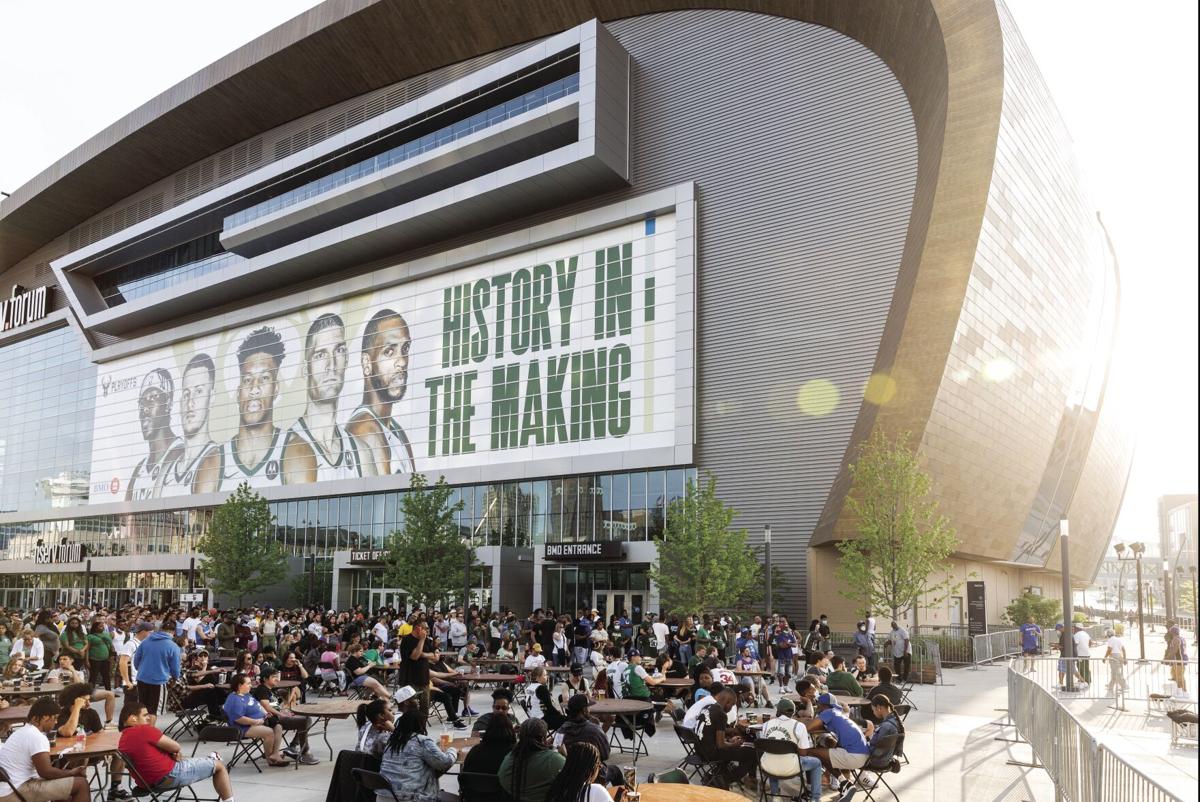 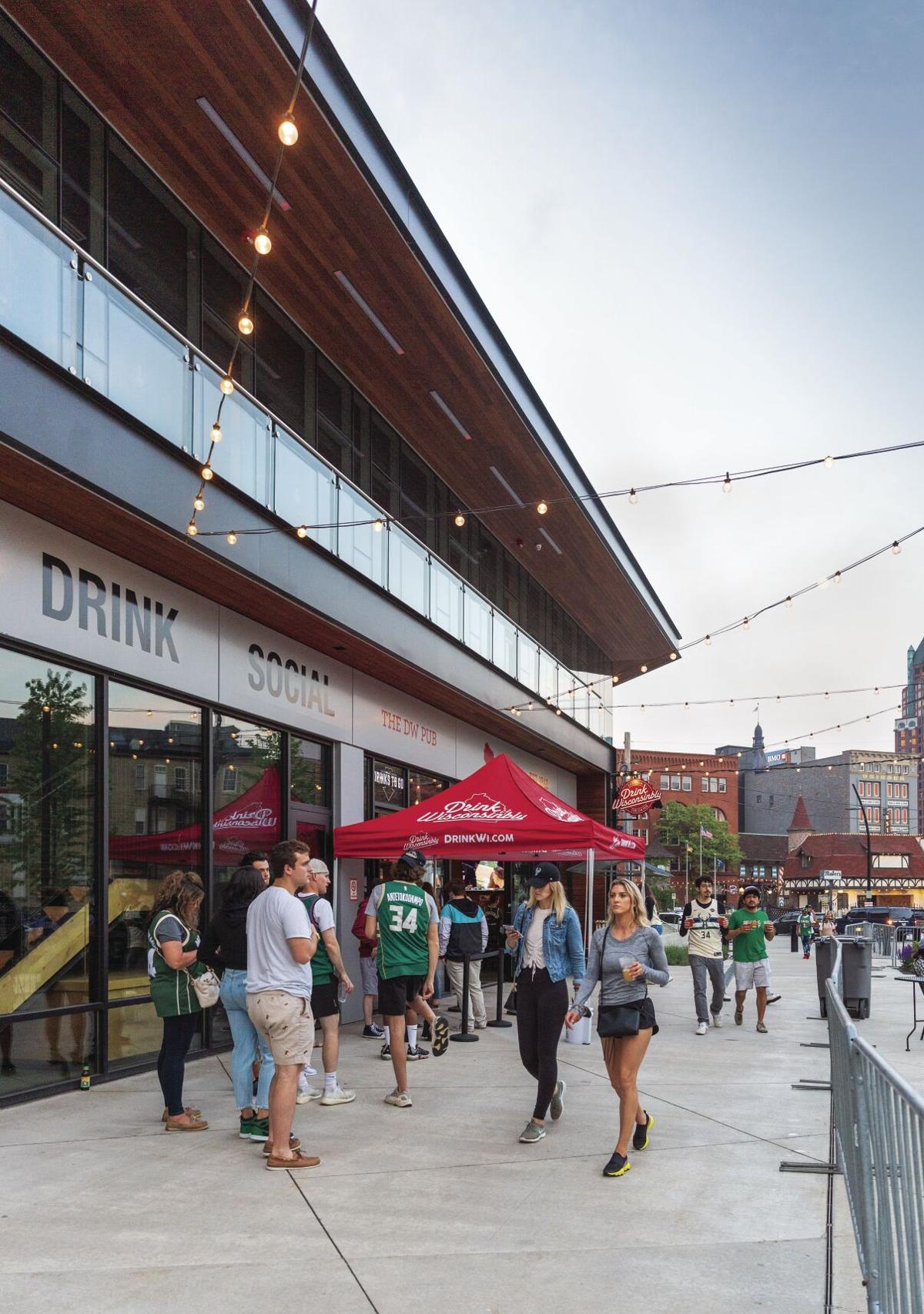 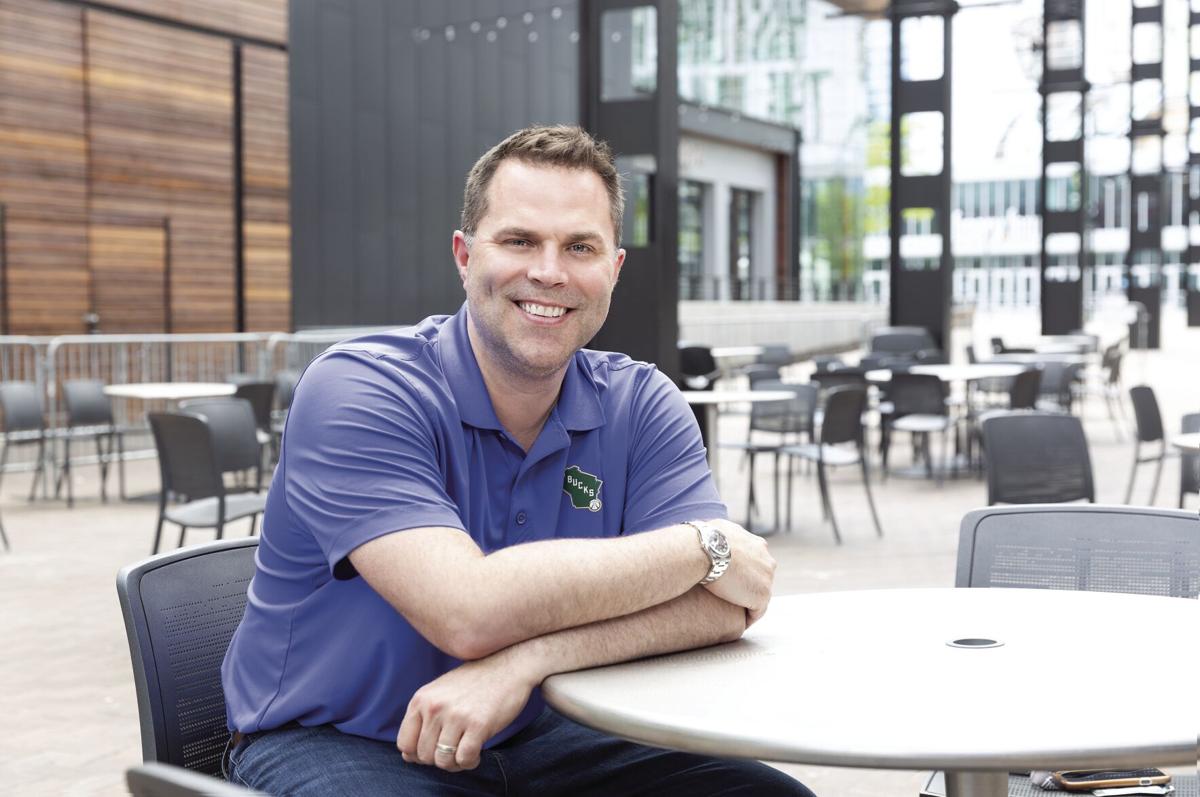 Michael Belot, senior VP of ventures and development for the Bucks 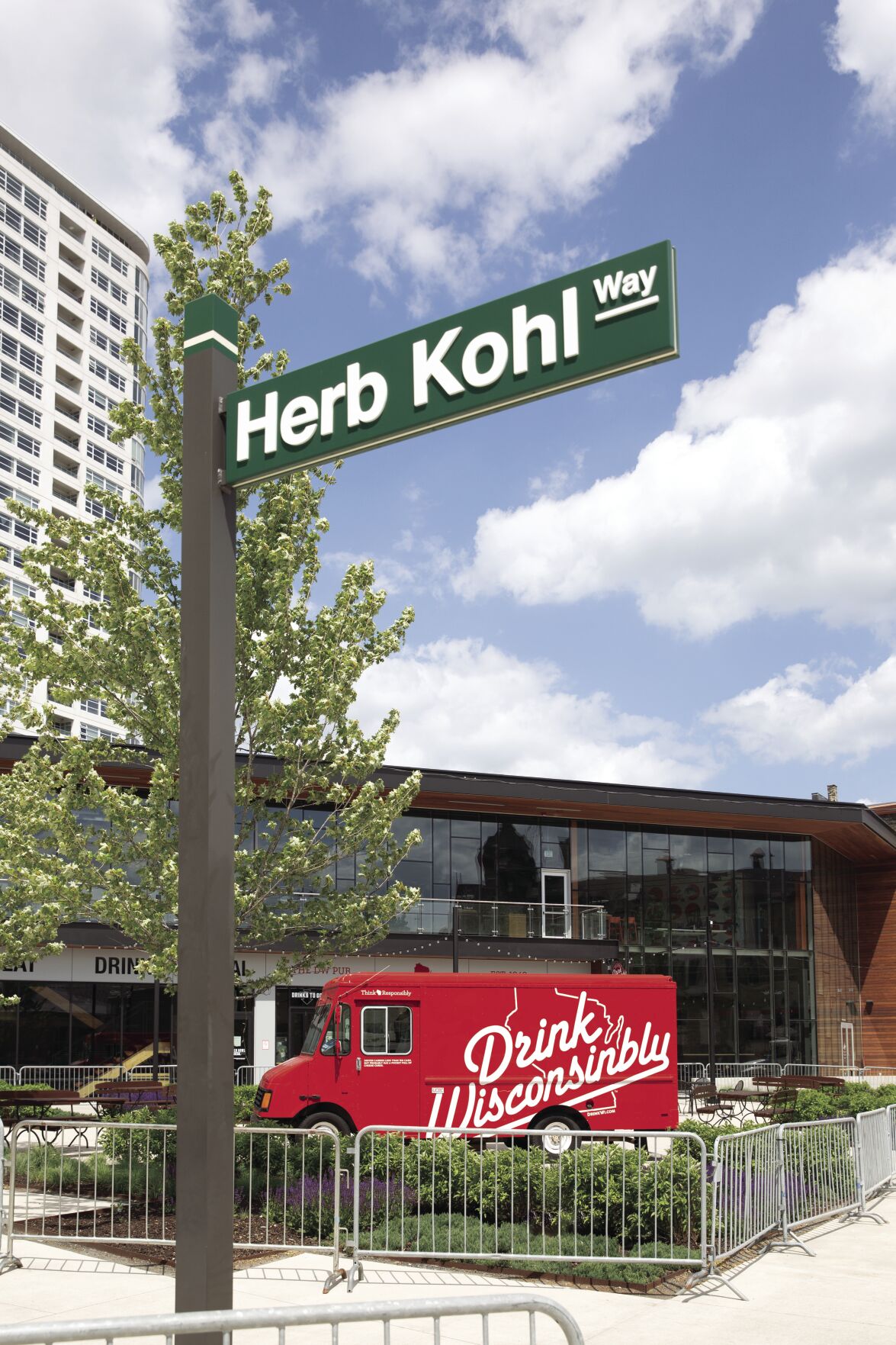 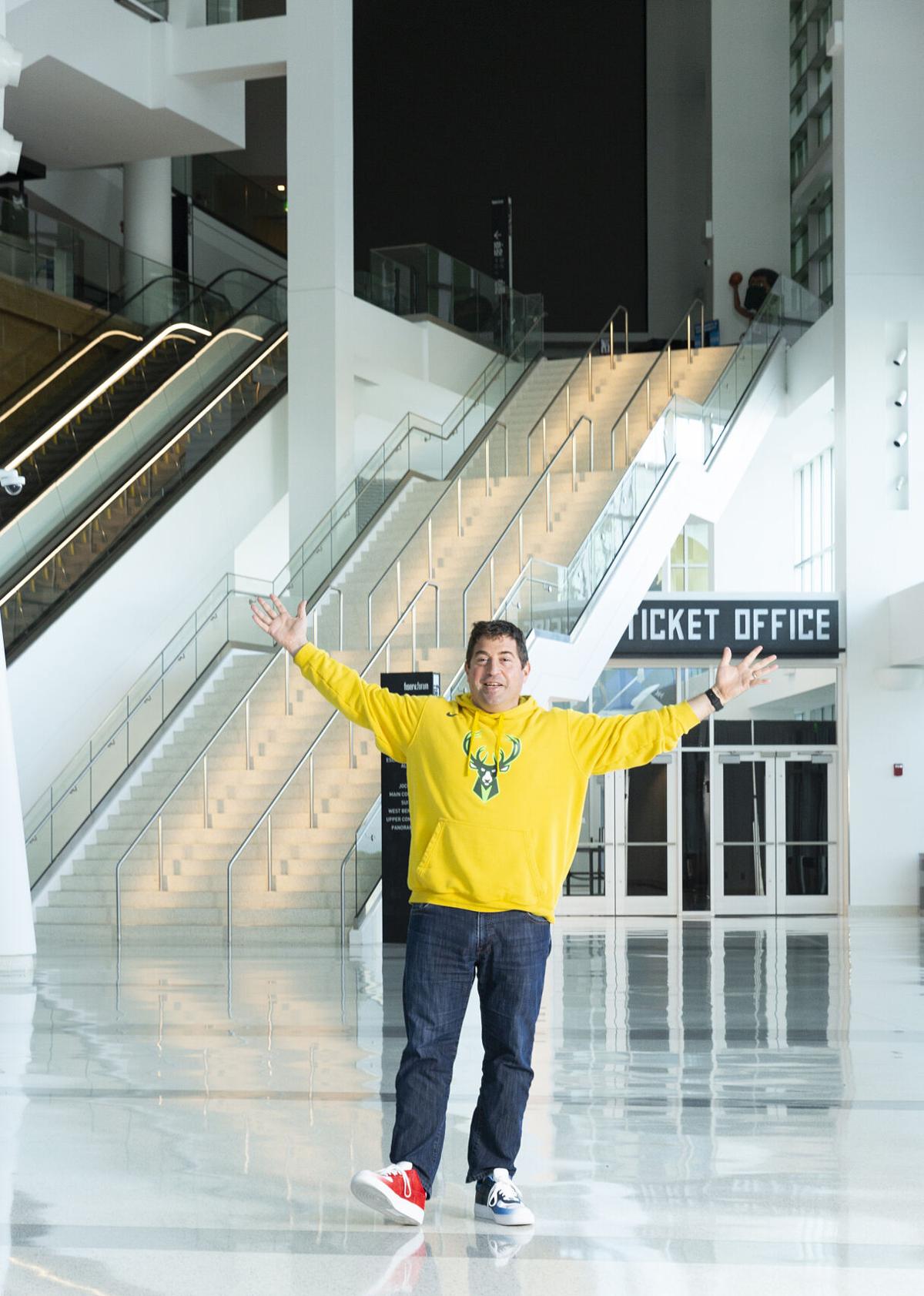 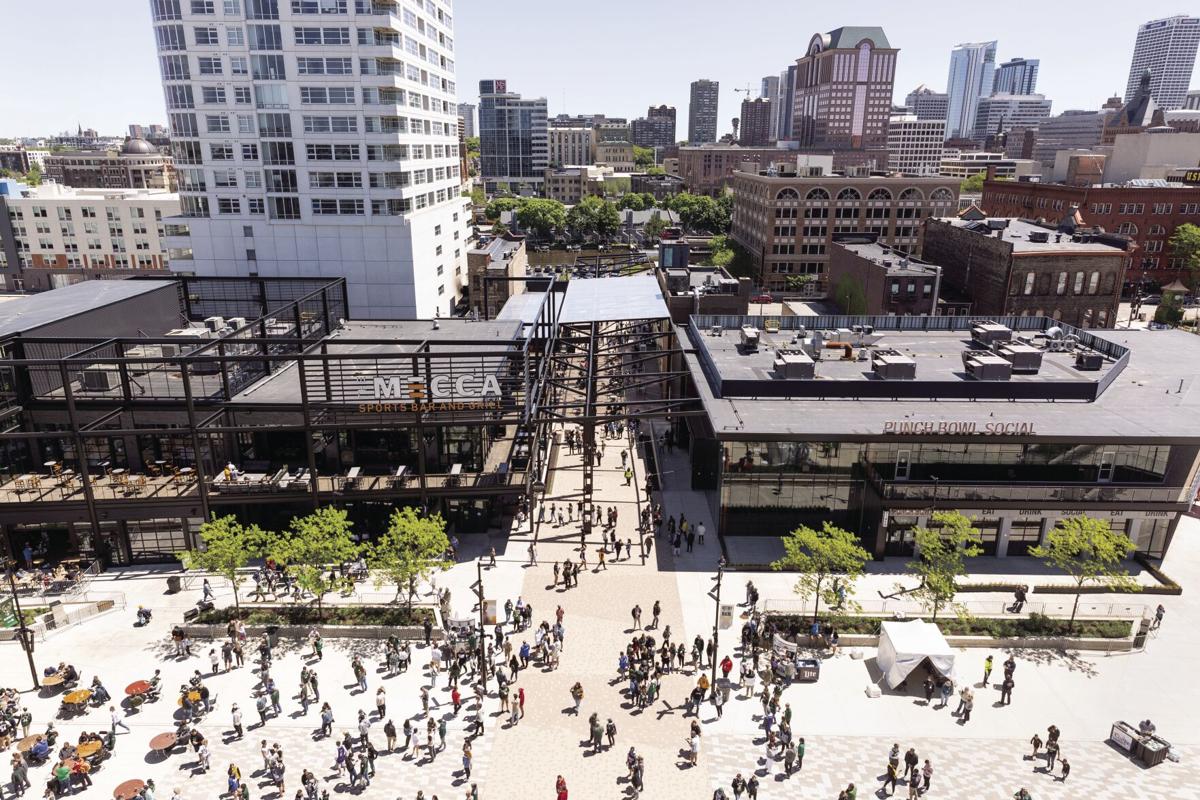 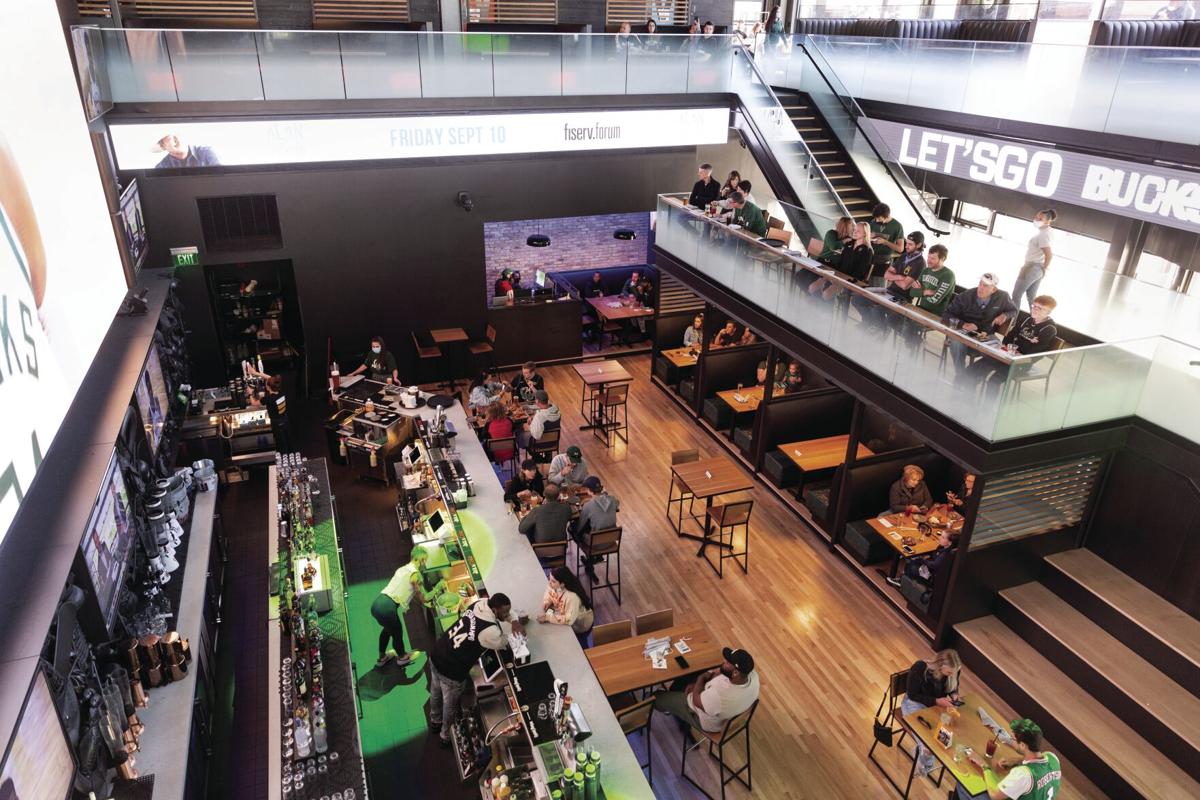 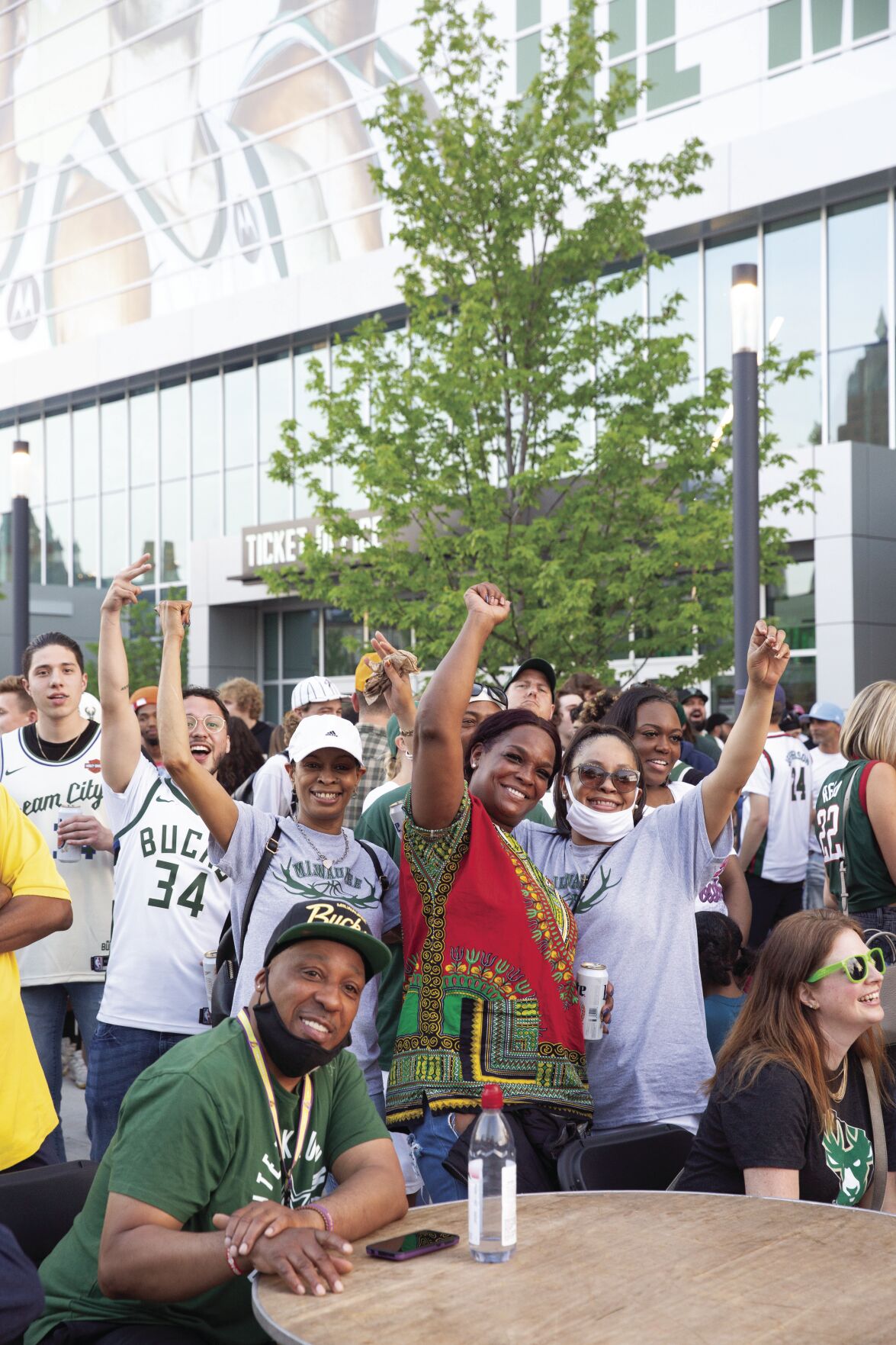 Back in the 1820s, a certain 30-acre portion of Milwaukee was viewed as challenging and physically daunting terrain where furriers, traders, and decades later, machinists, carved out their livings. Two centuries later, this area bordered by McKinley Blvd. on the north, Wells Street on the south, Water Street to the east, and Sixth Street to the west has been dubbed the “Deer District.” And a formerly dangerous work district has been reinvented as a venue where people can come to live, work and play.

The Deer District now stands as a city gateway for thousands of locals and tourists, an oasis of restaurants, bars, gathering spots and family-friendly venues. And central to it all, it is home to a formidable NBA franchise.

“This isn’t just a front door to the arena but a stepping stone to the entire city — and really a destination for people,” says architect Matt Rinka, whose Rinka, Inc. firm helped design the Deer District. “We really needed to create a living room for the city, a place where people can come together.”

People and firms involved in the 21st century revitalization of the area are currently setting in place multiple opportunities for visitors to enjoy a total “immersion experience” catering to the appetites of a diverse clientele.

Not only is the district’s Plaza a gateway into Fiserv Forum and surrounding bars and restaurants such as Drink Wisconsinbly, the Mecca Sports Bar & Grill and Good City Brewing, but it is designed to be a destination in and of itself. There are basketball tournaments planned there along with yoga and fitness classes, and an ice-skating rink and outdoor holiday market for winter weather gathering.

“All of the buildings have a lot of outdoor space with garage doors to blur the line between inside and outside,” says Steve Morales, a partner at Rinka. “The Plaza is actually designed like a cone and can hold up to 12,000 in an outdoor amphitheater setting.”

In July of 2019, Five Fifty Ultra Lofts debuted in the District, welcoming residents to their new apartment homes in the heart of one of the most walkable, entertainment-rich spots in the city. And in early May, the latest pieces of the Deer District puzzle were formally announced.

“The Trade” hotel will go up just north of the Fiserv Forum. This 205-room Marriott Autograph Collection property is scheduled to break ground in the fall and will provide an estimated 200 construction jobs and 100 permanent jobs when the doors open in 2023.

The hotel is named to honor the men and women who built our city and continue to do so.

“Milwaukee has a great tradition of hardworking skilled tradespeople,”says Andrew Inman, vice president of development for the North Central Group (NCG), which is building the property. “We want our guests to feel like they are a part of the Milwaukee story. We want the builders to be honored and remembered — a permanent payment of respect.”

“The Trade” will sit directly north of Fiserv Forum. Additionally, current plans call for a “blank canvas” of undeveloped property just east of “The Trade” to become a mixture of retail developments and 250 residential units. And Head of the Herd Development LLC, an affiliate of the Milwaukee Bucks, recently announced that it is seeking tenants for a potential 10-story, class A office development, featuring some 250,000 square feet of office space.

Bucks president Peter Feigin says there are many reasons to marvel at what is being built in and around the Deer District. He estimates the area’s development will bring in more than 1,000 jobs and hundreds of new residents to the area.

“To see something come out of nothing is really incredible,” Feigin says. “We are starting to realize the impact of this development. It represents a renaissance in development for Milwaukee.”

The Deer District will also integrate many unique facets into an urban landscape. Its creation draws on environmental and architectural ideas found in similar developments the district’s planners discovered not only from across the country, but “across the pond.”

“We literally scoured the country and [went as far as] Chelsea in London,” Feigin says. “We picked and chose the best elements.” Additional inspiration comes from sports entertainment districts in cities such as Atlanta, Kansas City, St. Louis and Columbus, Ohio.

Despite the international influences, designers and builders united in a concerted effort to make the district unique to Milwaukee.

“The one key in Milwaukee is that you have to be authentic. Everything must fit in [architecturally],” Feigin adds. “For the Fiserv Forum, we used ultra-modern building designs with traditional arches. It is designed to flow into the landscape.”

When the Bucks’ new management began the process of planning and building Fiserv Forum, they certainly were dreaming much bigger than a sports arena. The city gave the Bucks options to buy the land surrounding Fiserv Forum. “The Bucks didn’t want to just build a new arena; we wanted to build a destination spot and help rebuild downtown Milwaukee,” says Michael Belot, senior VP of ventures and development for the Bucks.

“We created a master plan for a development,” Feigin adds. “In order for it to be really complete, we need to build areas for work and living. We want people to live, work and play here. It is not just a temporary destination but a living destination.”

The entities embarking on that ambitious plan are proceeding with confidence in their vision, noting collectively that a great demand for places to “hang out and play” in downtown Milwaukee has been evidenced in recent years.

In short: people showed up. They gathered at the new bars and restaurants and sat outside and watched the Bucks, Brewers and Packers on outdoor big screens in the Beer Garden.

“We were just soft-opening the place. We hadn’t even named it the Deer District yet,” Belot says. “Hundreds of people showed up during the 2018 playoffs. Social media had a lot to do with it. The Bucks’ playoff run in 2019 put the district on the map. It opened our eyes to what this could be. Truthfully, it exceeded anything we could have imagined.”

Belot adds that the 18,000 fans inside the Fiserv Forum were expected. The 10,000 fans who packed into the plaza and surrounding bars/restaurants in 2019 were not.

“It grew organically. [The Plaza] became the place to be if you couldn’t be at the game,” he says.

Unfortunately, the welcoming party in the city’s “living room” was curtailed as the COVID-19 pandemic showed up as a most unwelcome guest in early 2020, putting an economic hurt on businesses on the Plaza. Most notable is the national franchise Punch Bowl Social, which filed for bankruptcy late last year. Belot notes that there are plans to reorganize and reopen the dining and recreation spot.

He is also optimistic that the public will respond favorably to the Deer District’s revitalization as a whole and return as soon as businesses deem themselves ready to responsibly and responsively handle the crowds. “The Deer District will be one of the fastest areas to come back in the city,” Belot predicts. “People have missed the chance to gather. The question will be how to do it safely.”

Milwaukee mayor Tom Barrett agrees that the Deer District represents “a great opportunity to make the heart of our city even stronger. … Cities are all about getting things done. That’s the approach we’ve taken here. Industry was Milwaukee. It is Milwaukee. It always will be Milwaukee.”

Ironically, the build-up of the Deer District into a central venue was a vision very few, if any, Milwaukeeans had for the area just a few decades ago. A key transformation began in 2002, when the Park East freeway (now known as McKinley Blvd.) was torn down.  Former Milwaukee Mayor John Norquist, whose administration was in place during the demolition, was (and still is) adamant that highways in cities are a blight and a major development mistake. He does, however, support the district’s current plans and gives a special nod to those businesses working to showcase the Milwaukee Bucks and all that the team stands for in this city.

“What they are doing is all good. They are making up for what the city did [decades ago] to accommodate the automobile,” Norquist says. “The Bucks are much more sensitive to what it means to be in the city than big institutions were 30 or 40 years ago. I give them a lot of credit for that. They are doing the kind of planning that is very urban-oriented and conscious of pedestrians.”

The  demolition began a 15-year period of relative blight in the area. Yet, while people may have wondered at the time about the wisdom of tearing down a freeway only to have the area stay vacant, the clearing of city property proved to be a blessing in disguise.

Belot says the Bucks are on a 10-year development plan for the areas north and northeast of Fiserv Forum. “We’re on pace to [meet our 10-year plan],” he says. “There is no reason to rush. It isn’t all about economics. This is something that is going to be here long after any of us. We want to make sure that we do it right.”

Banking on the Bradley Space

Additionally, the vacant land that used to house the Bradley Center is still to be developed.

“The Bradley Center never became a catalyst for other development,” says attorney Bruce Block, who helped structure the legal portions of the Deer District development. “People came, saw an event and left.”

But, he notes, “… [The Deer District project] is creating another destination within the city. Now we await the do-over for the do-over as the Plaza comes back to life, along with the rest of the city. Pent-up demand is going to be huge. There is going to be a real desire to come back.”

Starr Butler is the new vice president of booking and events for Fiserv Forum. She says the next year will see a full schedule of concerts, family programs such as Disney on Ice, and, of course, Bucks’ basketball. But, she adds, she is really looking forward to seeing what events inside Fiserv Forum will mean for activity outside of the building: “We want to bring everybody together to have multiple experiences throughout the district.”

While no plans have been announced for the Bradley Center property, there is talk of a convention center-style hotel that would augment the Wisconsin Center district immediately to the south and help draw conventions to Milwaukee that have been opting for other Midwestern cities.

“It’s most exciting as you rarely get to develop an urban neighborhood basically from scratch,” he says. “It’s incredible to see something come out of nothing. Besides the Bradley Center, these were brownfields.”

Crump also sees the Deer District as a catalyst for future city development.

“This is a lesson for other parts of the city,” he says. “While you generally don’t want to see vacant lots in the city, they can help bring us together [to create something new].”

Feigin and Block both stress the importance of shared communication between the private and public sector as proposed projects arise, crediting such communication for helping to make the Deer District development possible from the start. In comparing the area to American Family Field, Block noted that it took five years to pass the legislation (by one vote) for the baseball stadium and secure the financing while legislation for the Deer District project took just 10 months.

“Entrepreneurs needed to have vision — leadership in government and the private sector at the local level [to make this project happen],” he says. “It is exciting to think that people will now make the Deer District a destination.

“Our opportunities are boundless,” Crump added. The area will bring people together. It truly is everyone’s living room.” MKE