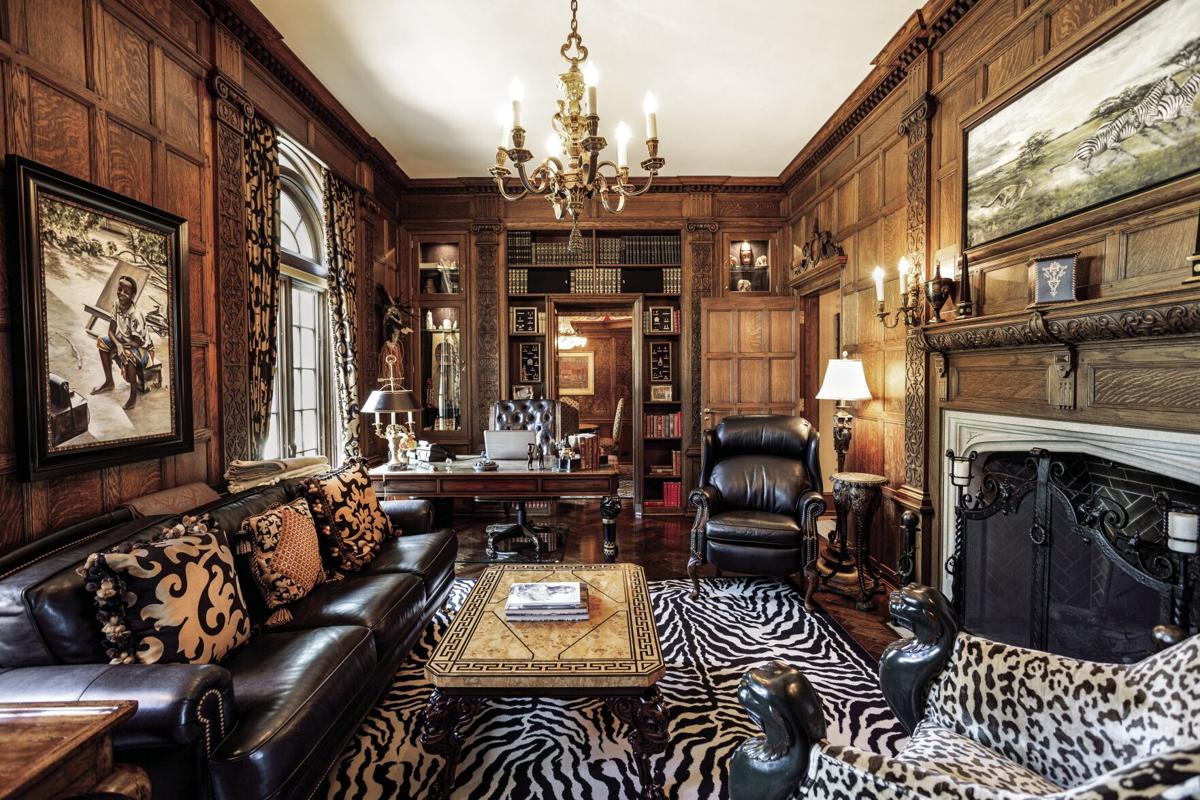 Paul Sullivan’s den has an African theme with items he picked up over the years while working in Africa. 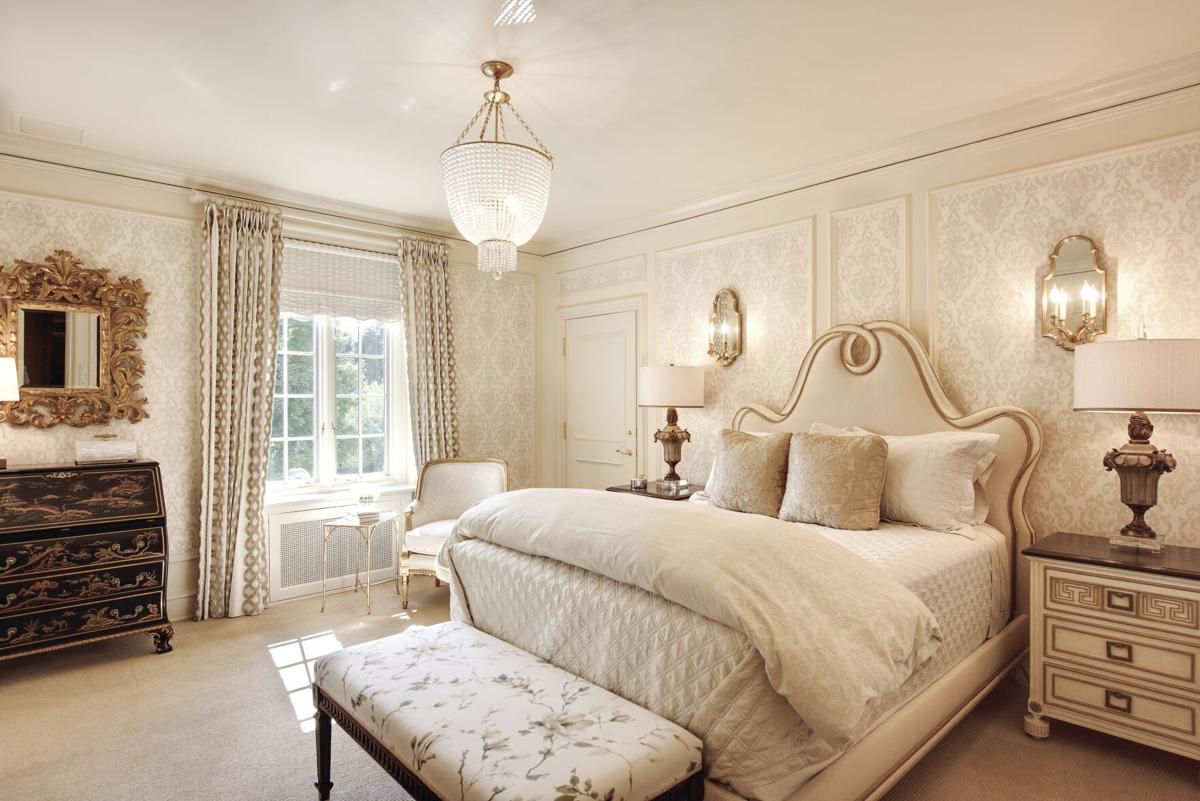 In the late 1980s, when Peter Buffett owned the home, Bill and Hillary Clinton and the Clintons’ daughter Chelsea visited. Chelsea stayed in this bedroom. 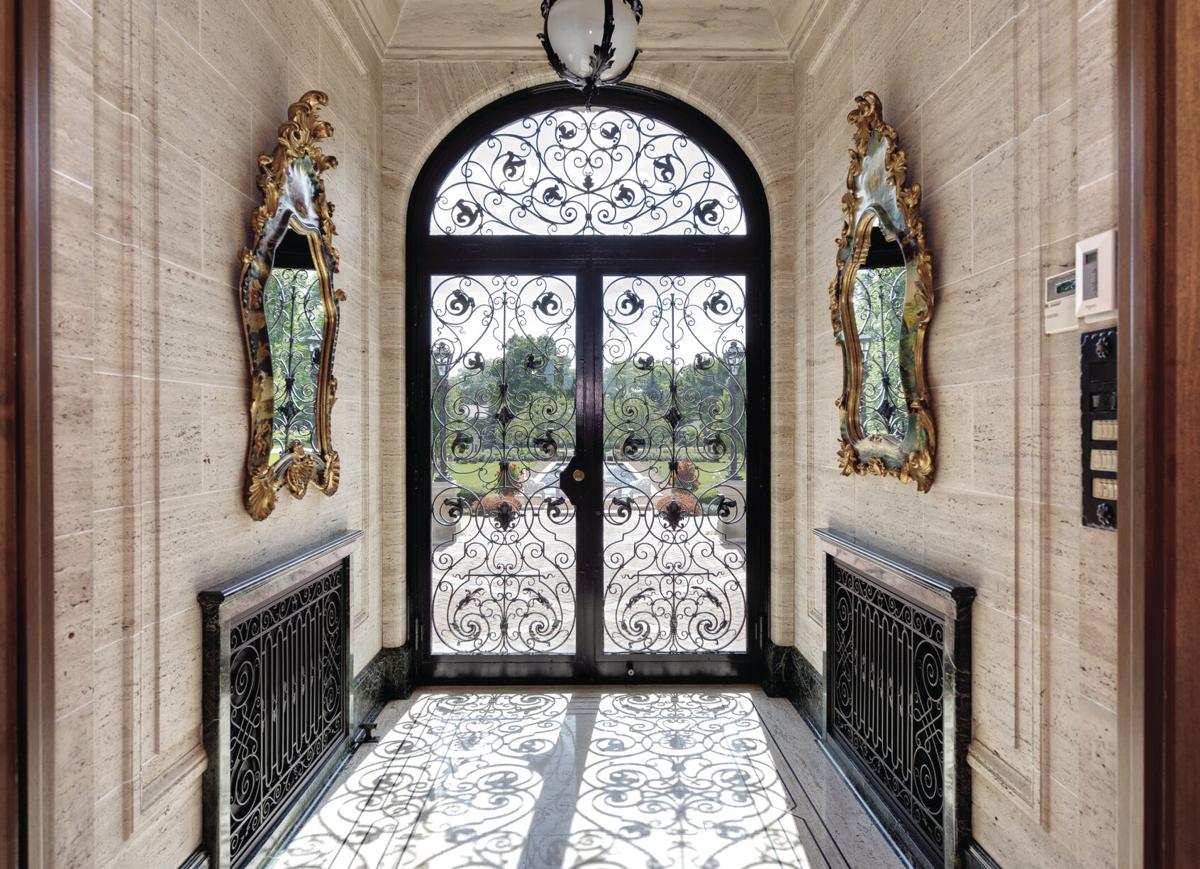 The ornate entry doors to the Uihlein home. 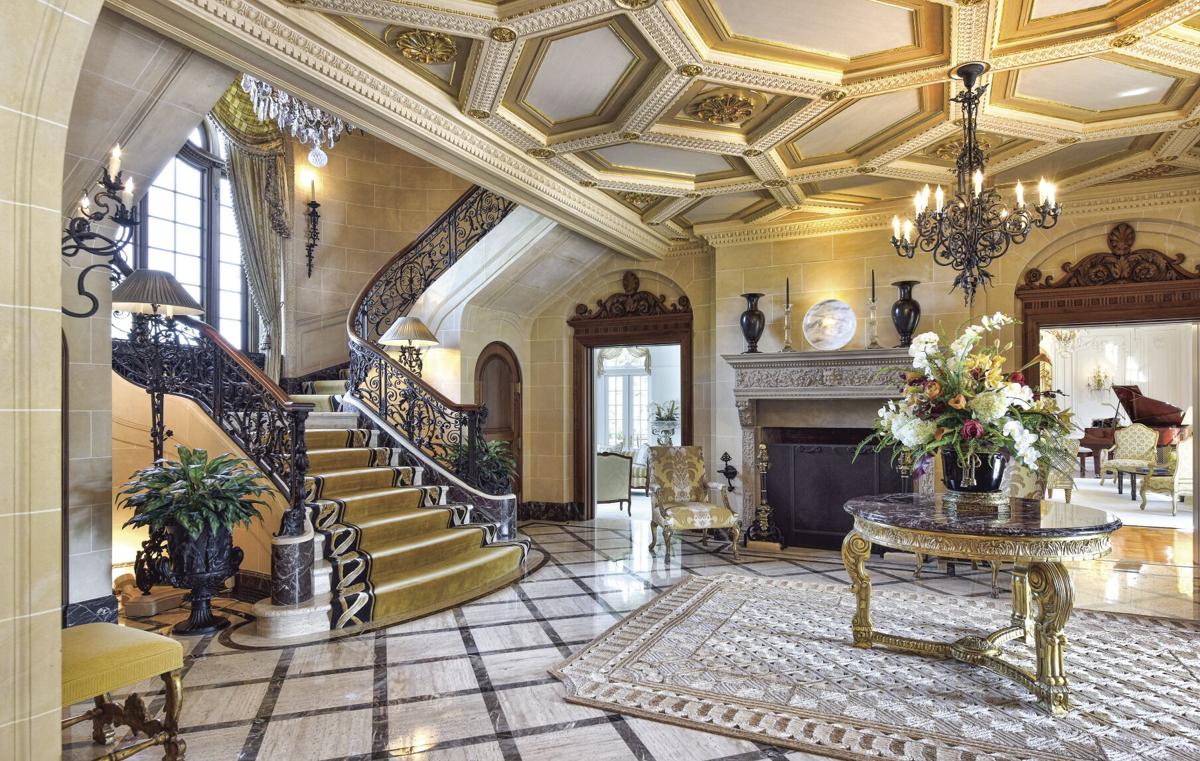 Much of the interior is still original, including the chandeliers and the wrought-iron staircase built by Cyril Colnik in the main entry. The 13,000-square-foot home has been updated to includes four different HVAC systems. Electrical and plumbing throughout has been updated during the Sullivans’ ownership. 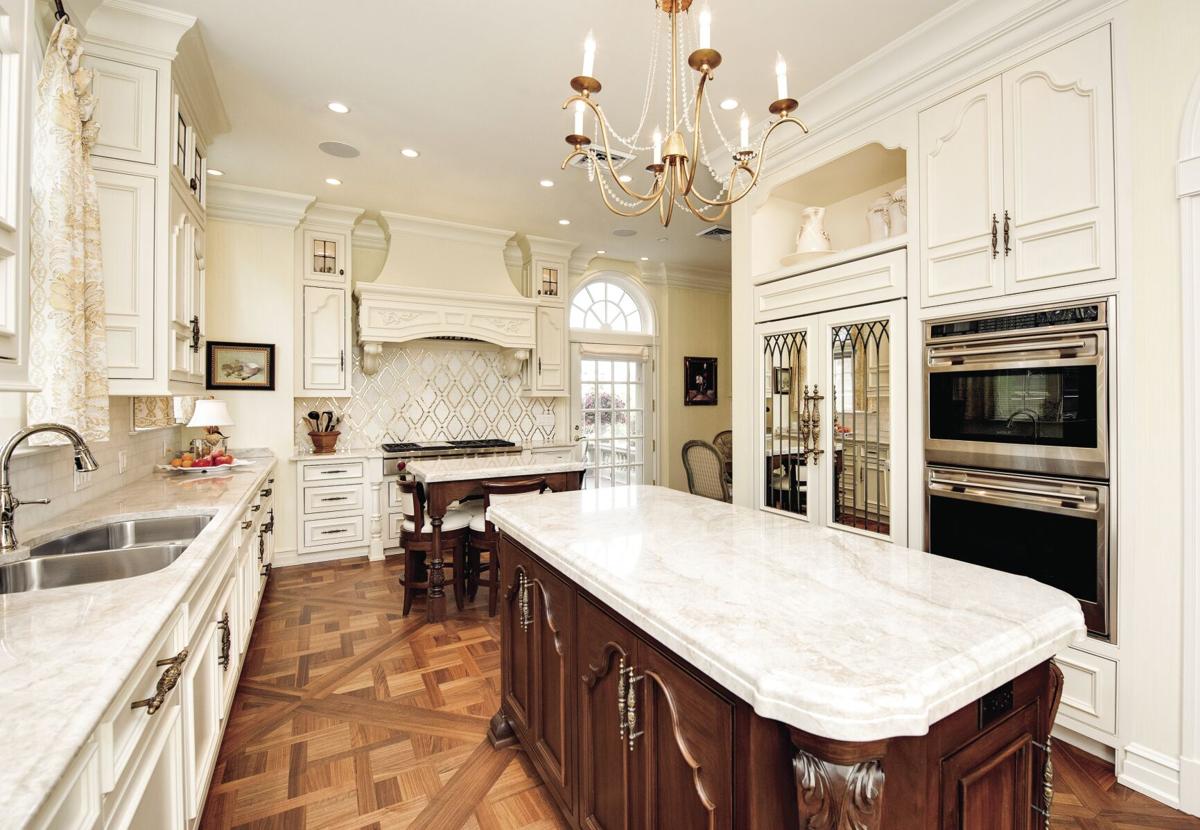 The Sullivans completely remodeled the kitchen within the past two years to create more space and light. The door next to the range leads to a breathtaking view of Lake Michigan. 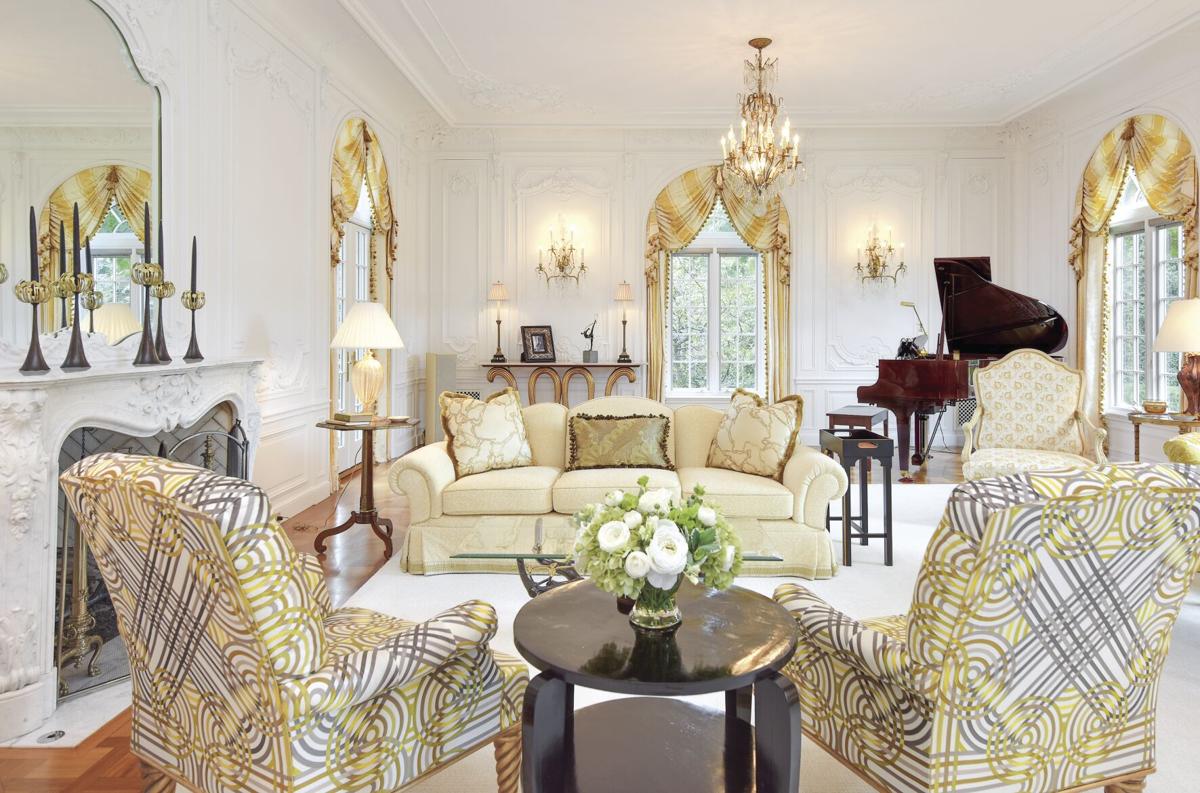 Vivian Sullivan intentionally updated the interiors to match the flavor of the Uihleins’ décor, but with a few modern touches. Here, the sitting room includes updated wall paint and area carpets.

Whitefish Bay’s breathtaking Uihlein Mansion, a Lake Drive landmark on a bluff overlooking Lake Michigan, was first the site of an 18-acre resort built in 1888 by Capt. Frederick Pabst of the Pabst Brewing Company.

The grounds, then called the Pabst Whitefish Bay Resort, brought in eager visitors by carriage, train and steamboat to enjoy lounging parlors, dining rooms and a large, circular bar overlooking the great lake. For a few years, the resort also boasted one of America’s very first Ferris wheels.

By 1914, the resort was razed and the lot subdivided the following year. Joseph Schlitz Brewing Company heir Herman Uihlein and his wife Claudia purchased one three-acre plot in 1915, spending years building a sprawling, 23-room Beaux-Arts style home for a half-million dollars.

The Uihleins lived in their gorgeous creation until Herman’s death in 1942. Claudia stayed for another four years before selling the home to a Milwaukee real estate holding firm, Central Office Buildings Inc., which kept the mansion until selling it to a Catholic order in 1953 to use as a mission house for five priests and two brothers. In the late 1970s, the Grant C. Beutner family purchased it, successfully placing the mansion on the National Register of Homes in 1983.

In 1988, Steven and Christiana Nicolet bought the home, invested heavily in its maintenance and renovations, then sold it to renowned musician Peter Buffett (son of investor Warren Buffett) and his then wife Mary the following year.

While living there, Peter put Whitefish Bay on the map when he composed the song “Fire Dance” for the Oscar-winning Kevin Costner epic “Dances With Wolves” in his recording studio on the third floor of the historic home. So impressive was his setup that when he relocated to New York in 1992, he had the roof lifted off of the home so a crane could move the recording equipment.

Executive and entrepreneur Kailas Rao and his wife Becky purchased the home, spending three years extravagantly updating the home and grounds (and writing a 2003 book about the experience) before selling it to its current owners Tim and Vivian Sullivan.

“We both loved the historical value of it,” adds Tim. “And the residual benefit of it was, 80 percent of my business was outside the United States, so this was a great place to entertain a lot of our international visitors.”

Along with the space the 13,000-square-foot home provided the Sullivans and their visitors, the mansion’s sweeping water views were another huge selling point. “You’ll notice every room you go in on the east side, you’ll get a view of the lake,” Vivian explains. “And we’re on three acres. And we have a path and then steps [leading] down to the lake.”

Driven by their love of European architecture and design, the Uihleins worked with the architecture firm Kirchoff & Rose to complete their Italian Renaissance vision. The exterior of the home was created with Bedford limestone blocks from an Indiana quarry, and all stone ornamentation in the home was carved on-site.

The Uihleins also worked with local craftsmen — from masons and carpenters to ornamental plaster and glass and marble artists — to create style-appropriate elements throughout the home.

The second floor houses an expansive master suite equipped with a spacious bedroom, a boudoir room and closet, and a serene bathroom fitted with a soaking tub surrounded by windows to take in the unrivaled vistas. The floor also houses a media room, two bathrooms and an additional six bedrooms, three of which were once servants’ quarters and are now occupied by the pair’s grandkids. The top floor of the home boasts Peter Buffett’s former studio — now Tim’s favorite place to work — plus a home gym, a playroom, another bedroom and a small kitchenette for guests to use.

To enhance the European aesthetic, the Uihleins hired Austrian-born ornamental ironwork artist Cyril Colnik, who spent three years completing ornate ironwork on the entry doors, on the grand staircase balustrade, fireplace screens, chandeliers, sconces, furniture, indoor fountains and other grilles and balcony railings, much of which are still present in the house today.

“Mrs. Uihlein was definitely ahead of her time [with her design], and the ironwork. You can’t find artisans like that anymore. You just can’t,” Vivian says.

Though the Raos’ made some modern updates to the mansion, Vivian painstakingly restored and redecorated every room in the home.

“I’ve redone every bedroom, every carpet, every bathroom, except the little blue and white bathroom upstairs. Completely gutted and redid those,” Vivian says, adding that she also updated the walls from drywall to plaster, restored fabric wall coverings, and updated paint colors to both brighten certain rooms and bring the aesthetic together.

One example of Vivian’s airy updates is the formal living room, where the Raos had applied a bold gold shade to the walls. “It seemed that, over the years, [the room] got darker and stronger,” Vivian observes.

And though the paint colors needed a refresh, the Sullivans devoted themselves to restoring the original paintings above doorways throughout the home, and on the ceiling of the second floor foyer.

“They had asked about painting over that, and I said, ‘No, that’s original. That’s staying,’” Vivian says. The paintings, she adds, were covered in soot and needed to be cleaned and revitalized. From there, the walls of the formal living room were transformed with a neutral, bright white and gold leaf touches added to keep the grand aesthetic of the mansion and match the gold chandeliers. Vivian also added subtly stripped white walls and a neutral ceiling to brighten up the Terrace Room, which the Raos had embellished with dramatic murals reminiscent of Kailas’ India homeland.

The original kitchen was a surprisingly small, narrow, utilitarian space painted deep shades of blue. With a few repositioned walls, fresh paint and a large glass door overlooking the water, the hub of the home is now a spacious, airy spot for cooking and gathering — though, the couple says, most gathering takes place in the spacious dining room just off the kitchen.

In that dining room, the original chandelier created by Colnik still hangs over a large, inviting table that rests atop a rug that mirrors the pattern of the dining room ceiling.

The home’s lower level features a refreshed and updated movie theater from the Raos’ time in the home. The Sullivans donated the original theater chairs, replacing them with more comfortable seating. Just off the much-loved theater is a welcoming bar. A billiards and game room completes the perfect space for relaxation, recreation and entertaining.

When the Sullivans moved in, dramatic landscaping installed by the Raos had become overgrown to the point of blocking the home’s glorious Lake Michigan views, so the Sullivans also painstakingly restored the three-acre property to splendor.

While the Sullivans have enjoyed their time in the Whitefish Bay stunner, they realized last year that the time to downsize had come.

“We’ve got two children, a son in Scottsdale and a daughter here in Milwaukee. So we’ll keep a presence here — just not an entertaining presence,” Tim says. “We need more of a reduced scope.”

The pair plans to split their time between Arizona and a local condo. But they loved their time in Herman and Claudia Uihlein’s showpiece, and they are excited for the mansion’s next occupants. And if you have several million to spare, it could be you.

As of press time, this Milwaukee area masterpiece is on the market, so, historic home lovers, you have the chance to call it yours. MKE