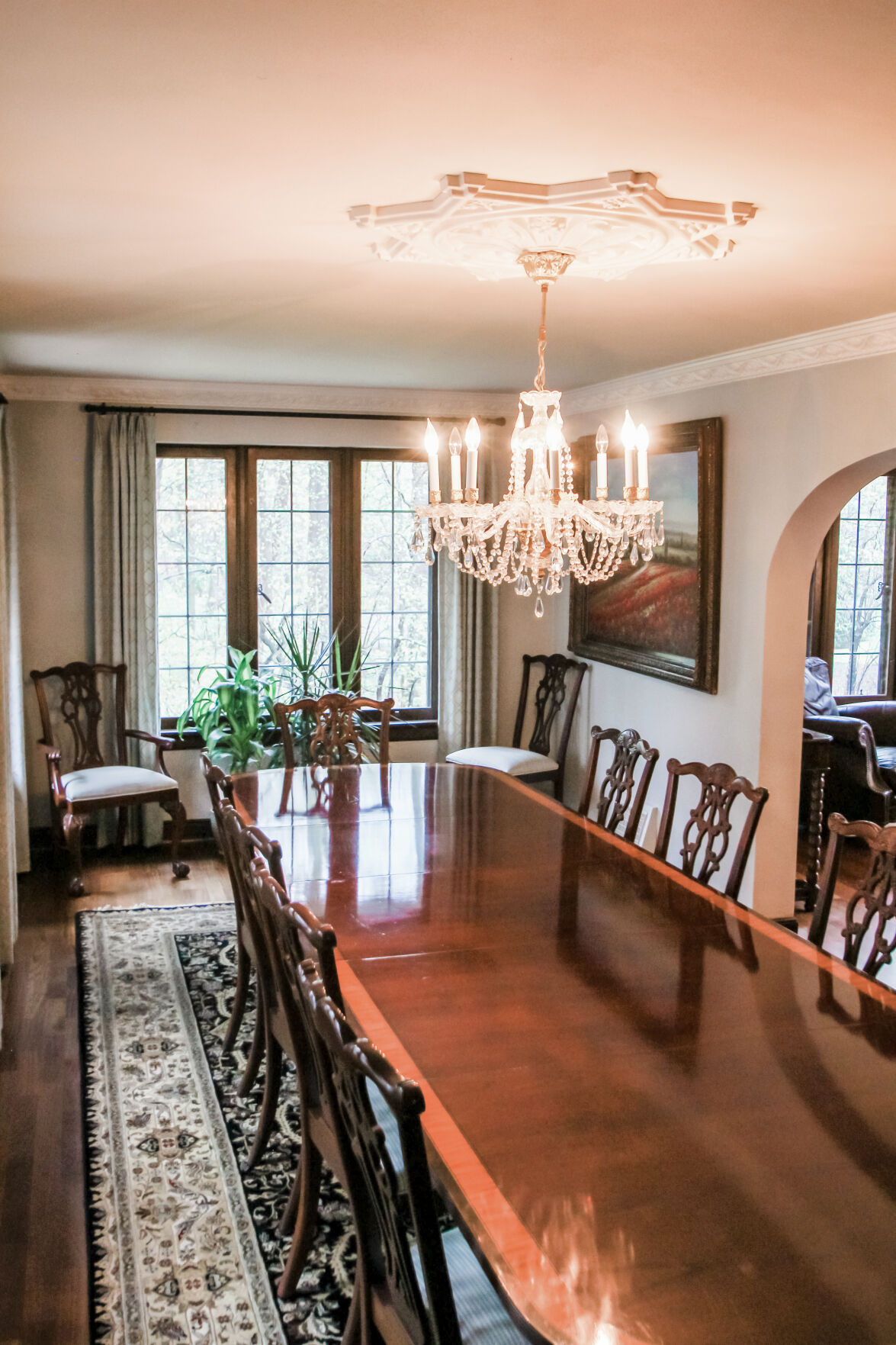 “I love the way they were able to tie in the old with the new,” Linda says. “Our renovation doesn’t look out of place in our nearly 100-year-old home — it fits seamlessly, and with all the modern conveniences of a new build.” 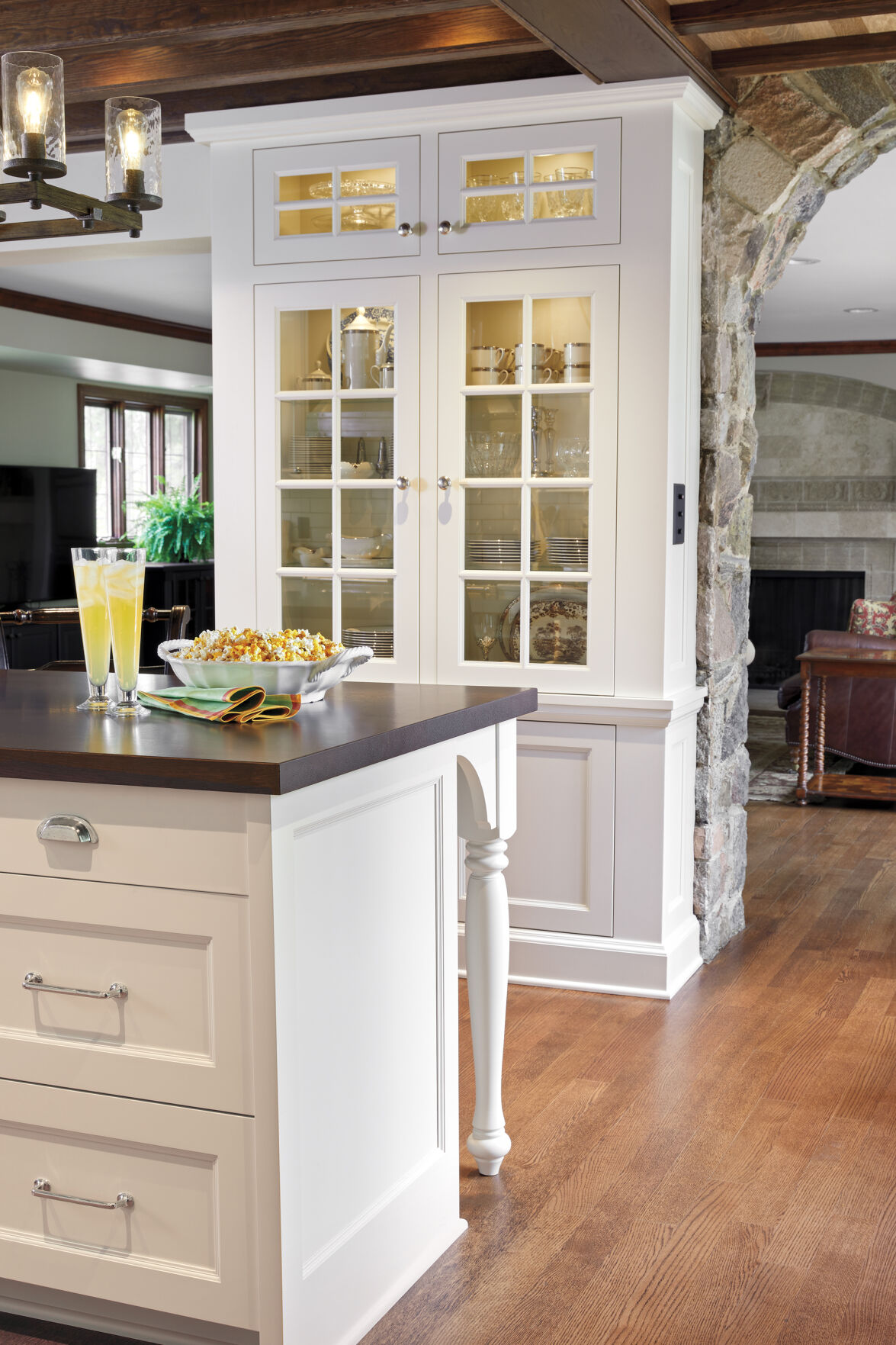 The renovation team incorporated original features such as the arched doorways and stonework to blend a new design into the historic home. 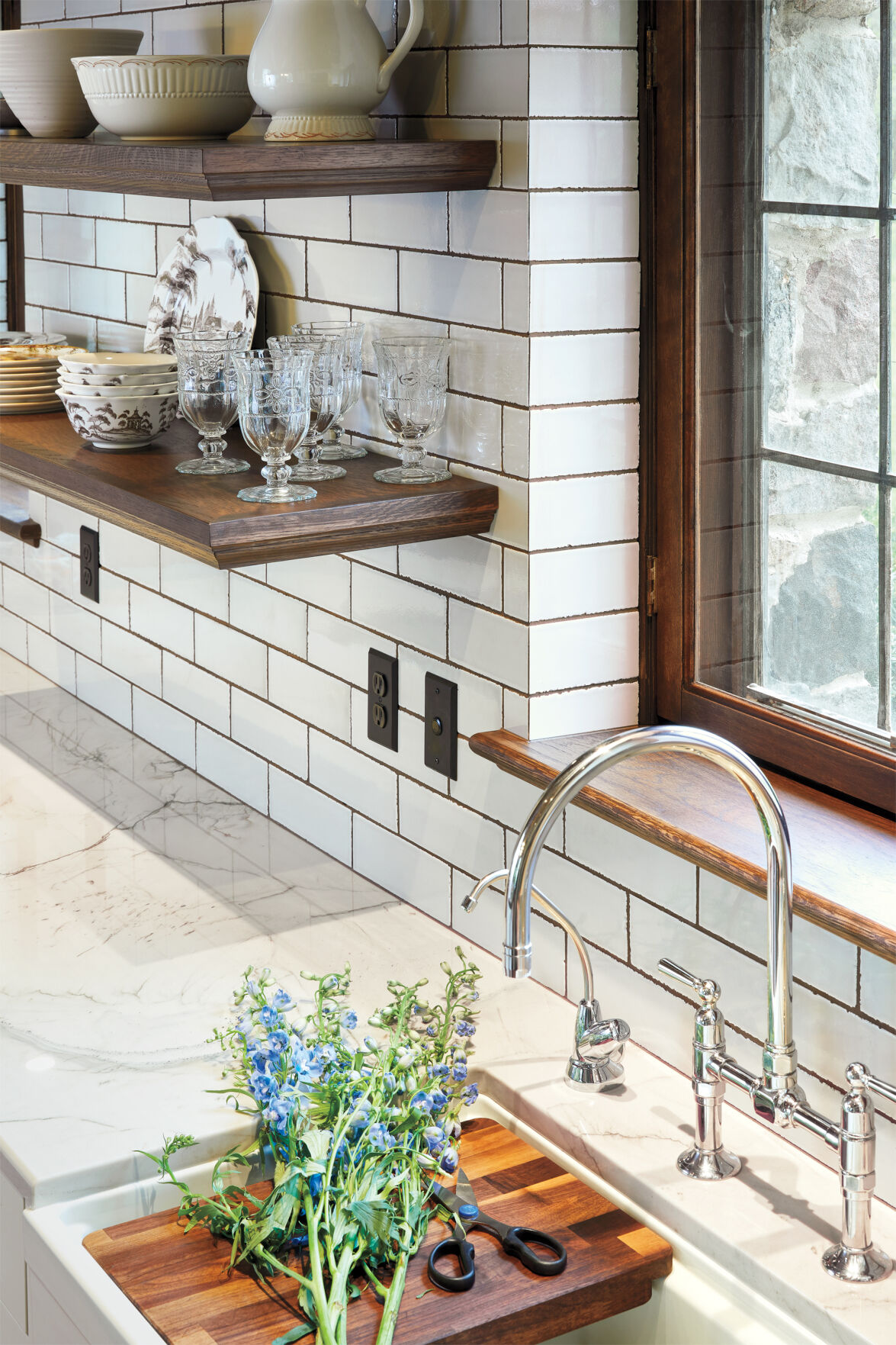 Jahns chose a purposefully imperfect backsplash, accenting the edges with a dark grout. 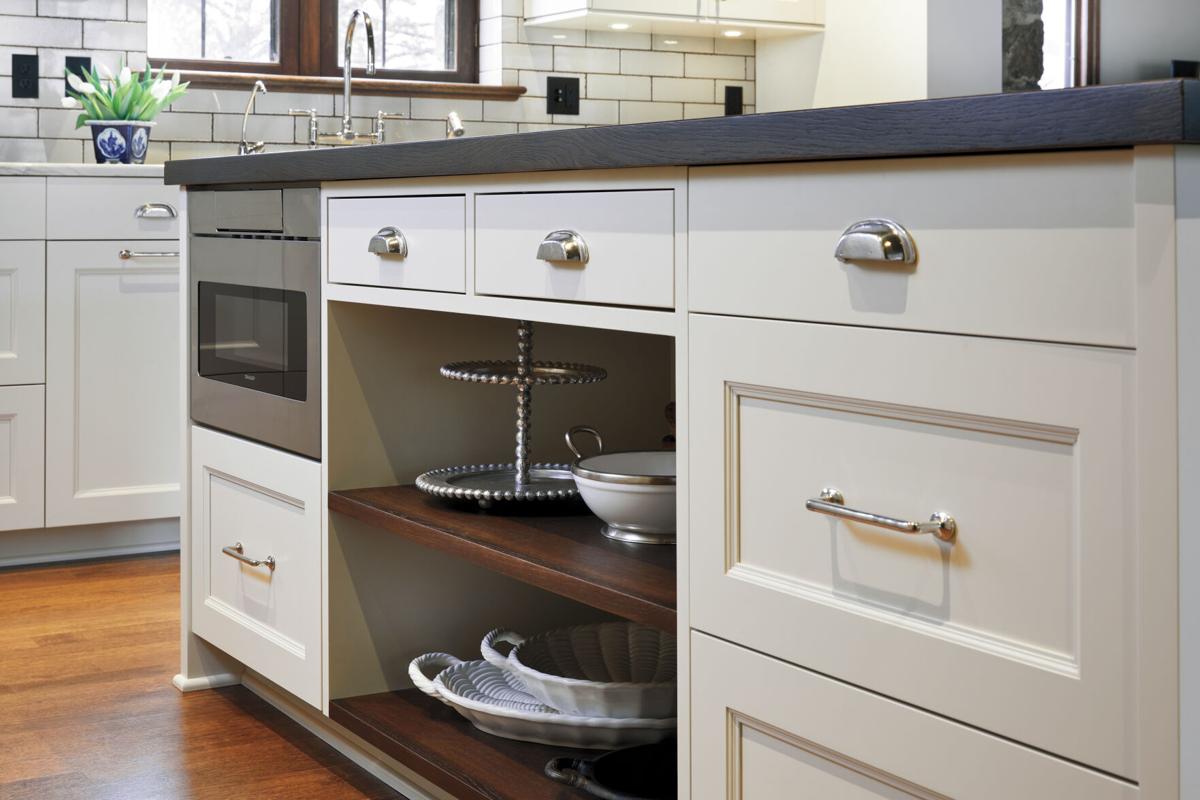 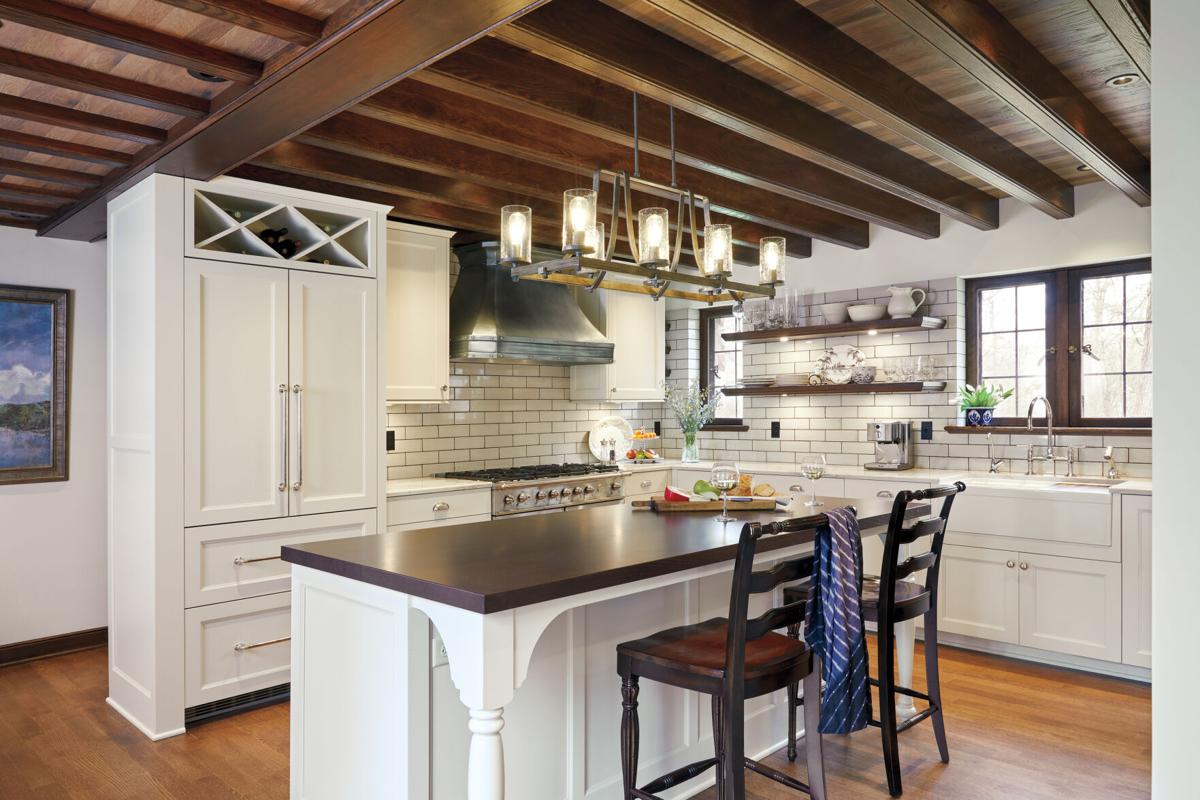 “I only selected one backsplash tile for [the owners] just because I believed in it so much,” enthuses Refined Renovations owner Matthew Jahns. “I just knew it was perfect for them, and they love it.” 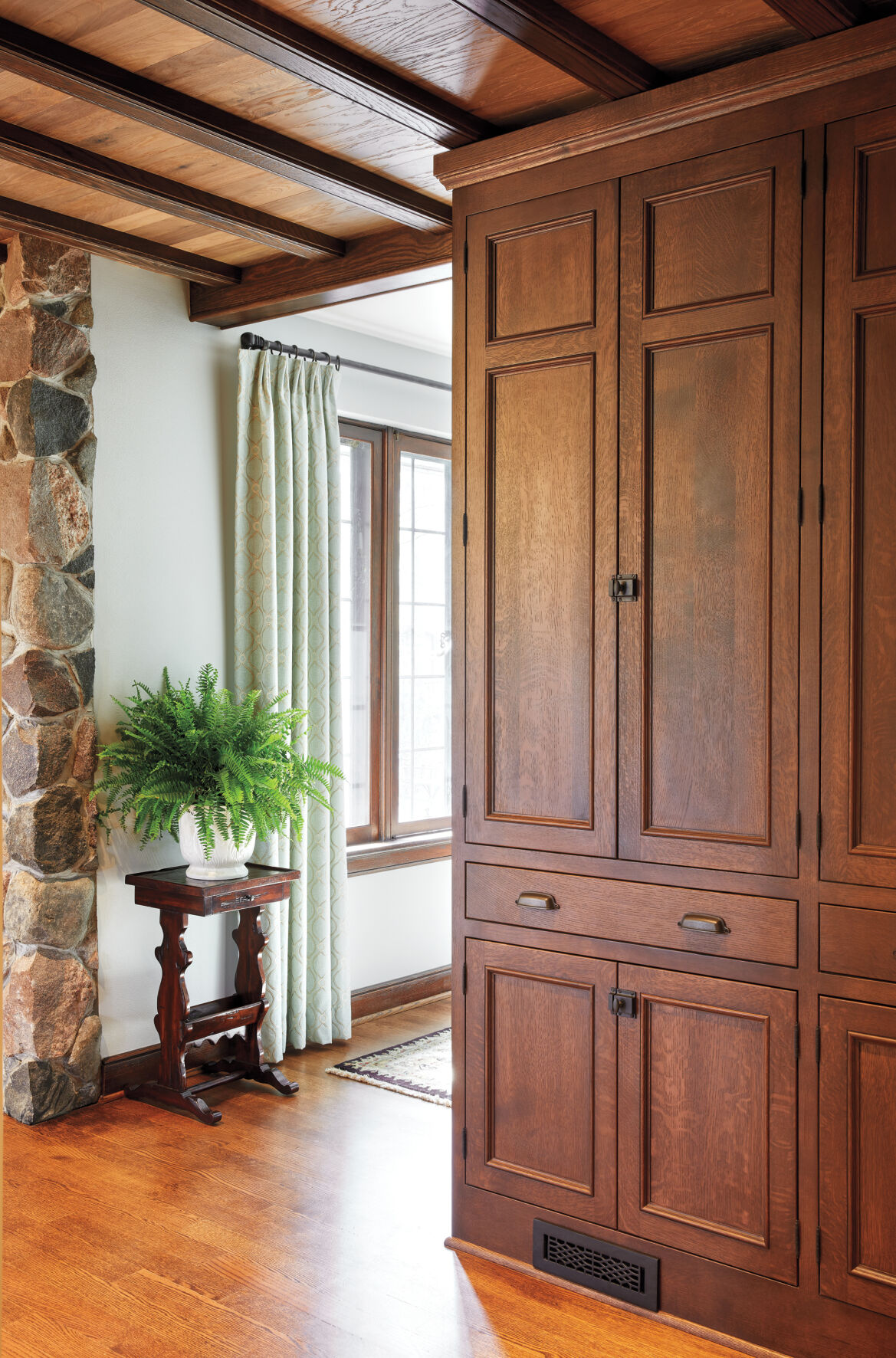 “The coolest feature we were most excited about was the addition of the ceiling beams, and when we presented it to them they agreed,” Jahns says.

“My husband and I loved the Old World character of the home, including the foot-thick stone walls, original carriage door garage and hand-carved wood fireplace mantel and surround brought over from a village church in England,” owner Linda says of the 1930s Tudor home. 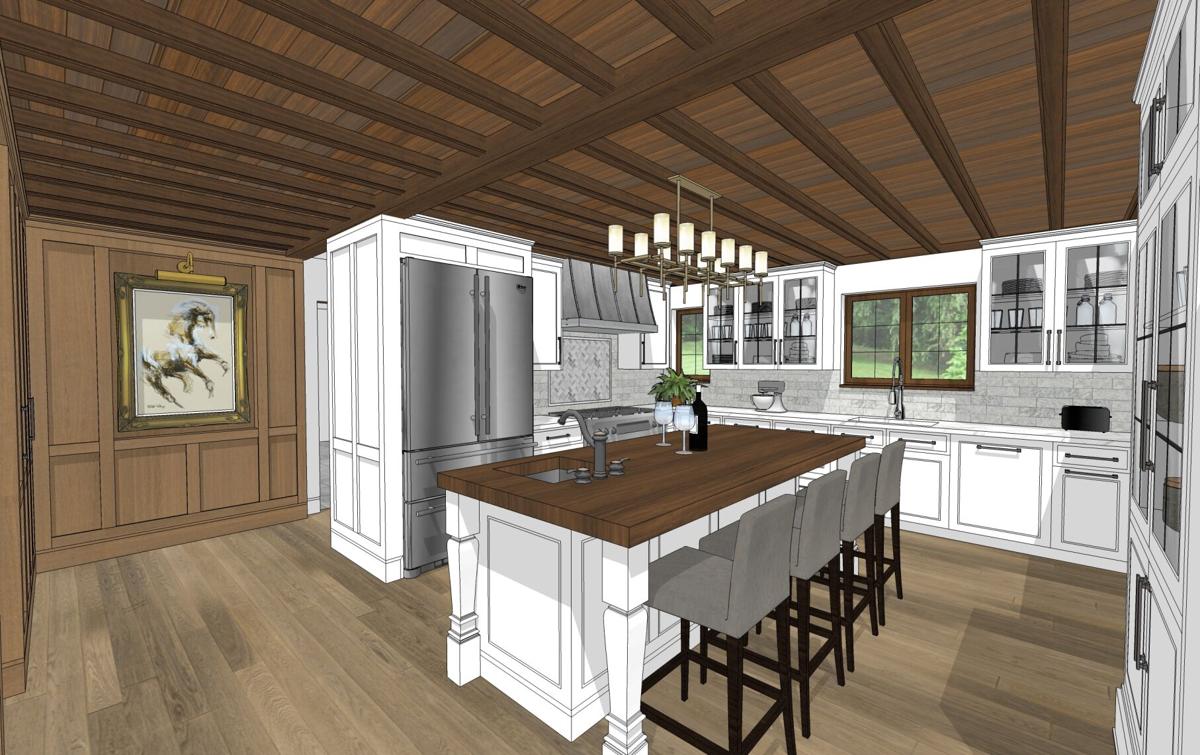 When the homeowners saw the renderings of the design, “they were all in,” Jahns says.

After a long period of unsuccessful house hunting, Linda and Dave took a drive through Elm Grove and immediately fell in love with a 1930s Tudor. As it turns out, the home was built by Milwaukee furrier Al Morawetz, affectionately nicknamed “The Raccoon King.”

Though the house was put on the market the year before, it wasn’t listed at the time. To Linda and Dave’s good fortune, the home was never purchased — and its current owners were willing to sell. The Tudor became theirs.

Though they loved the historic exterior of the home, the interior needed updating, primarily in the kitchen area. And according to Refined Renovations owner Matthew Jahns, the pair were up to the task.

“They were engaged in the process and they had an appreciation for the home,” Jahns says. “They knew what they were looking for. They knew the quality of some of the features of the house, and just wanted to accentuate it.”

Dave and Linda worked with the remodeling team to create a “country Tudor” aesthetic, adding touches such as wrought-iron lighting, exposed beams, oak hardwood floors, a walnut butcher block and custom cabinetry in the kitchen. And they made sure the final design honored classic details that initially caught their eye: arched doorways, kitchen windows and casements, plus original stonework and a 400-year-old carved fireplace mantel that Morawetz imported from England.

Jahns adds that the pair were “pretty laser-focused” on their wish list — though some of the details evolved as the design took shape. “They didn’t necessarily know how the house was structured, so the final space design was left completely up to us,” he says. “They latched onto some of the inspiration we came up with, and then built or generated some ideas off of that, but they really trusted us throughout the project.”

To make the most of the space, the Refined Renovations team spent six months working with Dave and Linda to finalize the design.

“The entire team understood the uniqueness of this space and brought ideas,” Jahns says. “For the treatment of the free-standing shelves or the free floating shelves in the kitchen, the electrician figured out how to make it all work. The cabinetmaker and the tile setter [contributed ideas]. Everyone understood their unique role and special place in this process.”

Though the home is adorned with beautiful stonework and historic character, the structure itself proved to be a challenge, thanks to the original builder’s extensive use of concrete. Ruling out an addition, the team worked together to enhance the existing space.

“To solve the problems, we wanted to show the owners an intelligent layout of the space they granted us,” Jahns explains. “We could creatively borrow some space, and we did that from the dining room.”

When the project was completed, casual elegance emerged in the historic original footprint. Jahns is proud of both the home and the lessons learned along the way.

“In every project, you learn something, whether you’re cognitively aware of that or not,” he offers. “I always tell customers that sometimes we’ll have a bolt of inspiration very early. [Sometimes] it’s forged through a lot of hours of thinking about it and wrestling with it and fighting for it. That was probably true here.

“The first few designs just didn’t resonate with us,” Jahns continues. “We were working [hard] to find one that we felt really good about presenting to the client. When we did, there’s so much satisfaction looking back and saying, ‘Yeah, all that effort was so worth it.’ That’s the takeaway — it’s always going to be worth it. Just need to put in the effort, time and energy to make sure it is.”  MKE