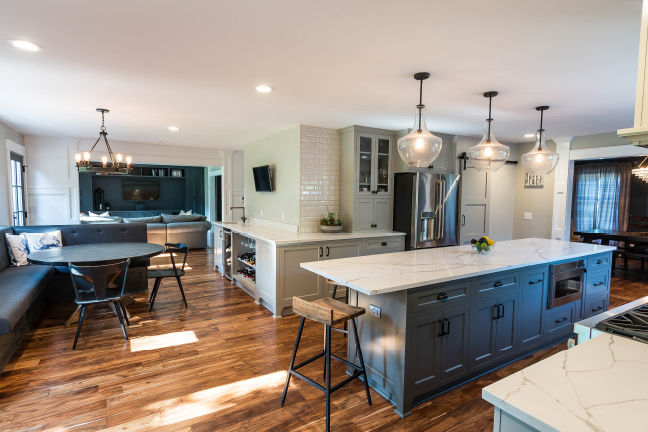 The homeowners loved the bones of the home, but wanted an open-concept kitchen and dining room. MKE Design Build designed their dream kitchen complete with custom cabinetry. 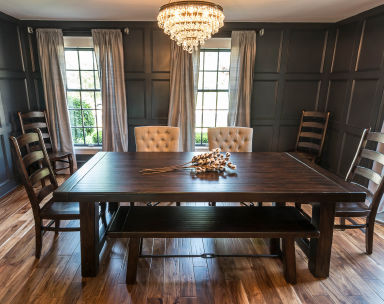 For a dramatic touch, MKE Design Build added dark grey paneling in the dining room to contrast the bright white of the rest of the home. 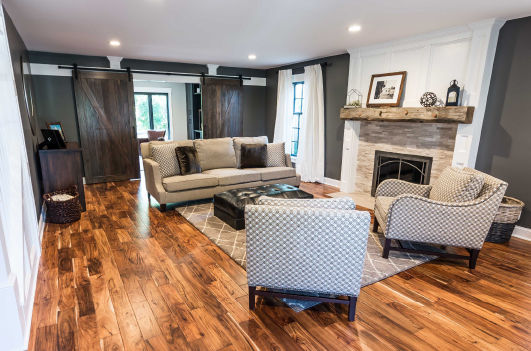 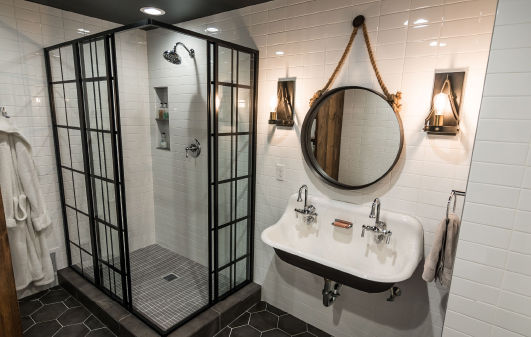 Considering both the homeowners’ wishes and their budget, the MKE Design Build team crafted a cost-concious but near identical replica of the pair’s dream shower. 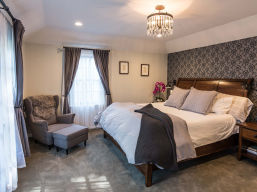 To add texture and a bold accent to the master bedroom, Swier added an elegant lace-pattern wall covering. 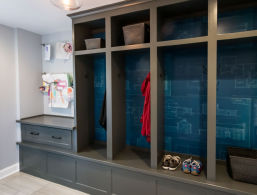 As a special surprise in the home’s mudroom, Swier turned the home’s original blueprints into a custom “blueprint”wallcovering.

Though they knew they only planned to stay in their newly-purchased house for a short time, one Whitefish Bay couple still wanted the 1960s home to feel as luxurious as possible before their next relocation. To partner in their passion for fixing up older houses, the couple called in Michelle Swier and Tom Gies, co-owners of MKE Design Build, to make the most of this beautiful brick home’s great bones and create a classic — if temporary — haven.

“When they purchased the home, it was the bones — that is all they were in love with,” explains Swier. “It was the red brick exterior, those features. The bones, the structure of the home was in perfect shape, and the size was great. All th windows were in great shape. [But] it was extremely outdated. There were only maybe one or two previous owners of the home, so they really didn’t upkeep or update it.”

Swier — who adds that she and Gies work from start to finish with their clients, completing the design and build aspects all in-house — went room by room with the couple, paying close attention to the flow of the layouts and keeping the homeowners’ wishes top of mind.

“Much of the second floor stayed pretty intact as far as the flow and the layout,” she explains. “But the entire first floor, they wanted more of that open concept. She wanted to work in the kitchen and be able to see the children in the living room, and have more of that connection and that flow.”

To open up those spaces, Swier says everything was torn down to the studs, reframed and designed as an entirely new floor plan. The homeowners didn’t want any drop beams, so to keep the structure of the second floor intact while losing load-bearing walls, a structural beam was added flush along the ceiling to add unseen support.

Now when visitors enter the home, they are greeted by two beautifully dramatic rooms, one on each side. To the left is a bold, dark-paneled dining room. To the right, the living room is outfitted with a plethora of custom pieces, including a custom barn door and mantle.

Swier explains that the selected color palettes were just as important to the homeowners as the revamped layout and flow.

“She brought colors to me and said, ‘I really like these dark hues with these light hues. I don’t want the whole house to be dark, but how can we really give that flavor of that light and dark together, and complement [those]?’”

To add in contrasting dark colors without overwhelming the overall palette, Swier maintained lighter cabinetry and paint colors in the kitchen and dining area, but added in dark, bold built-in cabinetry in the family room. To pop the colors even further, Swier added custom-made accent pieces throughout the home. MKE Design Build worked with Drexler Schleiss, who, in addition to the barn door and mantle, created custom built-in cabinets in the family room, kitchen and bar area, as well as custom bench seating with storage in the dining room. To give the pieces even more individuality, Swier hand-selected all of the hardware and knobs to carry the feel throughout even the smallest detail.

Custom inlaid paneling in the hallway and dining room, and custom columns along outer doorways add a traditional element and “paid respects to the age of the home,” Swier adds.

“That is what we wanted to do. Have a little bit of that farmhouse flair, but we really wanted that classic [look], to envelope that classic feel of the age of the home.... It was a nice, even balance and a nice mix for this space,” she says.

Another exciting custom feature in the home was the surprising decoration in the mudroom.

“I took all the original blueprints of the home and made them into a wall covering,” Swier says. “Instead of putting them in the living room, or putting them [somewhere obvious], I tried to be tasteful with it. We put them on the backs of the cabinets in the mudroom.”

Swier was also conscious of durability of both product and color, opting for darker wood on the storage spaces and durable tiles in the mudroom, as well as darker wood floors throughout the home installed by Stu’s Flooring that add a beautiful flair.

“That’s the ‘wow factor’ when walking into the house,” Swier says. “Being able to see [the living room] off the foyer. Having that deep, dark color in that room, and the beautiful light fixture is really pretty. Those are all separate crystals on there, all placed singly. But that’s really that wow factor when you walk into the house, seeing that custom wall paneling in that space.”

That wow factor bowled over the new homeowners, who were impressed by the beautiful touches and renovations and happy the home didn’t need further work. The homeowners had previously worked with MKE Design Build on their former home and were excited to move into their second home designed by the company.

“It’s actually funny,” Swier muses. “The person that bought their house, we were remodeling their old house, and this was by coincidence. So I heard from her, [and she said] that the second they walked into the [Whitefish Bay] house, they were really impressed with it. The whole thing was finished. Everything was consistent. Everything was pretty new, for the most part, and had that consistency. We really enveloped that through the whole house,” she says. MKE